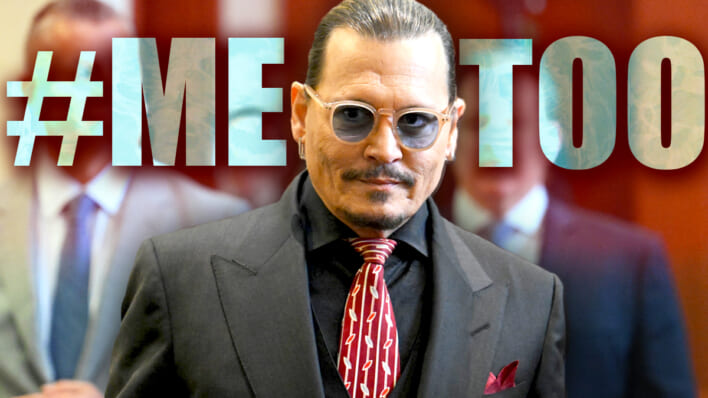 Does Johnny Depp’s Victory Mean the End of #MeToo?

After a six-week defamation trial that took over the internet, Depp’s triumph in court is being positioned as a fatal blow to #MeToo. But will one trial really be the end of an entire movement?
By Emily Weatherhead    June 11, 2022

After a six-week defamation trial that took over the internet, Depp’s triumph in court is being positioned as a fatal blow to #MeToo. But will one trial really be the end of an entire movement?

After an incredibly public defamation trial, the jury has ruled in favor of Johnny Depp, announcing that Amber Heard defamed him in her 2018 Washington Post Op-Ed. This highly controversial trial has sparked outrage from supporters of Depp and Heard alike, making it one of the most contentious trials in recent memory.

Scenes from the courtroom have been plastered all over the internet, with audio clips from testimonies even being used in viral TikTok trends. For a trial that originated from a private relationship between two people, it seems like the whole world has an opinion on its outcome.

Johnny Depp Vs. Amber Heard and the End of #MeToo

Many of the opinions surrounding this trial have deemed it to be the end of the #MeToo movement. These opinions have come from both supporters of the movement, who view the verdict as an unjust example of what can happen to those who speak out against abuse, as well as those who are propping up the trial as evidence of accusers who are lying about experiencing abuse. A lot of voices have continued to weigh in on how this relationship between two celebrities has undone any progress #MeToo has made.

However, one voice we should absolutely be listening to regarding #MeToo is that of its founder, Tarana Burke. In her recent Instagram posts, Burke fought back against the way the “Me Too” movement has been manipulated throughout the Depp v. Heard trial, emphasizing the immense positive impact the movement has made for survivors of sexual violence.

The Me Too movement was originally inspired by Burke’s work supporting young women at a youth camp, where one conversation with a survivor of sexual abuse sparked a movement that has blazed into a vessel for community change – community change that has all centred around the core idea of empowerment through empathy.

Echoing Burke’s sentiments, Me Too’s official statement on Depp v. Heard expresses its frustration at how the hashtag #MeToo was co-opted throughout the trial. Organizers argue that while the core of Me Too has always been to center and support those who need healing, particularly those who belong to marginalized communities, the use of the hashtag throughout the trial ignored its original intent, as well as its impact.

Depp Vs. Heard Does Not Lessen the Power of #MeToo

They also express frustration at the lack of coverage of anything to do with the positive work being done to support survivors of sexual violence and abuse, such as Me Too’s survivor leadership training, their Survivor’s Sanctuary healing platform, and their programs for promoting safe college campuses.

Objectively, it’s clear that the trial has been used as an opportunity to discredit survivors of sexual and domestic abuse. It would be naïve to say that this trial won’t have any implications for those speaking up about their abuse going forward. There is already speculation surrounding how this verdict may influence upcoming trials, particularly that of Evan Rachel Wood, who is being sued for defamation by Marilyn Manson.

RELATED: Did Johnny Depp V. Amber Heard Provide Closure for Anyone – Or Ruin It for Everyone?

The verdict has also bolstered people in their accusations of other survivors who have spoken up against their abusers, insinuating that they are all guilty of making false allegations. Whether you agree with the outcome of this trial or not, it’s also clear the ridicule that Heard has faced has been unusually volatile.

There will be ongoing implications of this trial for survivors who choose to speak up about their experiences of sexual violence, and these implications are important to examine and consider. But one trial cannot, and will not, derail an entire movement

Ultimately, one thing is clear: #MeToo is more than a hashtag. It’s a movement where many people find solidarity, support, and the strength to share their voices for the first time. It’s not going away anytime soon.

As Tarana Burke said in her Instagram post, Me Too “means something to millions and millions of folks. It means freedom. It means community. It means safety. It means power. You can’t kill us. We are beyond the hashtag. We are a movement.”