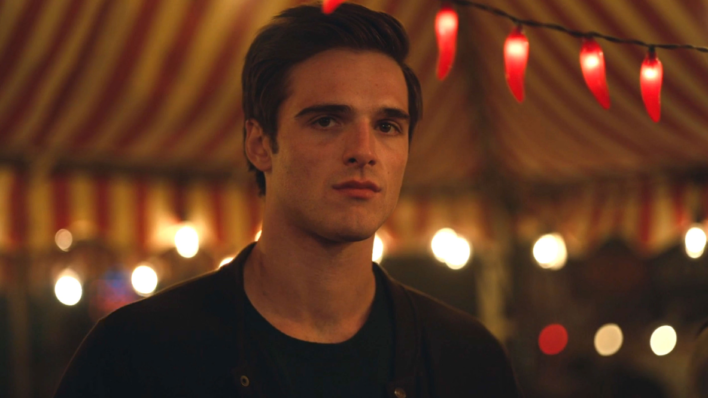 Jacob Elordi had a rocky road to fame before landing the role of Nate Jacobs on Euphoria. In fact, his current journey in navigating newfound fame isn’t much easier.
By Bianca Mercuri    September 3, 2022

Jacob Elordi had a rocky road to fame before landing the role of Nate Jacobs on Euphoria. In fact, his current journey in navigating newfound fame isn’t much easier.

HBO/HBO Max’s Euphoria came out in 2019 and has since exploded, spreading across social media like wildfire. Jacob Elordi as Nate Jacobs happens to be one of the fan favorites. With millions of viewers over the last two seasons, Euphoria managed to rack up a ton awards including Primetime Emmy Award for Outstanding Contemporary Make-up and MTV Movie + TV Award for Best Show. Their nomination list goes on for miles and even though they didn’t take every single one home, it goes to show how impactful the series has been in the industry.

The actors are crucial to the show’s success and are recognized for their intense performances. Zendaya, Sydney Sweeney, Alexa Demie, Hunter Schafer, and Jacob Elordi do an excellent job at portraying real-life issues such as sexual exploration and insecurity, drug addiction, body image issues, anger, and anxiety.

RELATED: The Real Reason Why Zendaya Is Staying Away From Relationships

With the show such a sensation, the actors were thrown into the spotlight quickly. One actor, in particular, may have needed the break more than the rest. Let’s talk about Jacob Elordi’s rocky road to Euphoria fame and how he’s dealing with the pressure.

You may also recognize Elordi from Netflix’s The Kissing Booth and its sequel. The movie wrapped up shooting in 2017. After the film, Elordi didn’t have the Hollywood experience you may expect. He told GQ that he was crashing on his friend’s couch in the San Fernando Valley for a few weeks, but he also frequently slept in his 2004 Mitsubishi.

“I wasn’t booking jobs,” Elordi explained, “I think I had – I don’t know, $400 or $800 left in my bank account – and Euphoria was my last audition before I went home for a little while to make some money and recuperate.”

RELATED: Will Smith Was Broke Before Landing ‘Fresh Prince’ Role, Almost Didn’t Go to Event that Changed His Fate

It may be shocking to hear that Elordi was essentially living out of his car with all of his belongings in the back seat, especially considering how much he’s grown into his career since the first season of Euphoria. While Elordi considers himself simply lucky for landing the role but would argue that no one else could have played a better Nate Jacobs.

It was during the shooting of the pilot when his lack-of-house situation started to get some attention on set. One of the producers noticed Elordi spending an odd amount of time in his trailer and his car parked next to it. “My car was like a hoarder’s, stacked with boxes and coat hangers and things,” Elordi said. The producers soon realized the reality of his situation and got him a room at the Standard in West Hollywood.

With the whirlwind of Euphoria blowing up, Elordi was thrown into stardom quicker than he could process. After Netflix The Kissing Booth, Elordi woke up to four million new Instagram followers. “I had to go through and delete my high school pictures because that was the Instagram that I used for my life,” he says, “I wish people could understand how drastic that change was.”

This isn’t the first comment that Elordi makes alluding to his distaste for fame. He is very candid about his fears, rooted in losing himself. He doesn’t want his identity on-screen to overtake who he is as a person. “I don’t want to lose the entirety of who I was when I was little, and when I grew up to whatever this is,” he says, “to whatever this public version of myself is now. I still want to be in touch with my younger self, which is everything that I am.”

Elordi clearly loves acting, but he doesn’t always love the culture around it and fears it will consume him. This is a relatable emotion that gives Elordi a much more human appeal than most celebrities. He’s humble, and actively is trying to stay that way by overcoming his anxiety of his ego overtaking him. He may not be completely sure of how to navigate his new life under a constant watchful eye, but he does a great job at expressing his concerns.

What Does Elordi’s Experience in Hollywood Teach Us About Risk and Reward?

Elordi’s whole Hollywood journey can teach us a lot. Firstly, it teaches us about risk versus reward. He didn’t even have enough money for rent, but he stuck it out and had faith that something would pull through. The risk of being broke did not supersede the reward of reaching his goal and that’s admirable.

RELATED: Here’s Why Passion Is the Key To Success

It also teaches us a lot about passion and how following what we love will pay off if we really work at it. Elordi always wanted to be an actor and it was something that fed his soul. He took that and ran with it. Even when it wasn’t working out in his favor, he let his passion guide him through life and everything fell into place!

But most importantly, Elordi’s current experience with fame teaches us that being famous doesn’t solve our problems but rather creates a whole new set of them. It changes your life, completely altering the way that you live and that’s not easy to accept or navigate. It can affect your personal relationships and your relationship with your own self. Living in the public eye can dramatically shift your self-perception including your sense of self, body image and so much more. Elordi may not have been ready for largescale fame just yet, but it’s now a part of who he is.