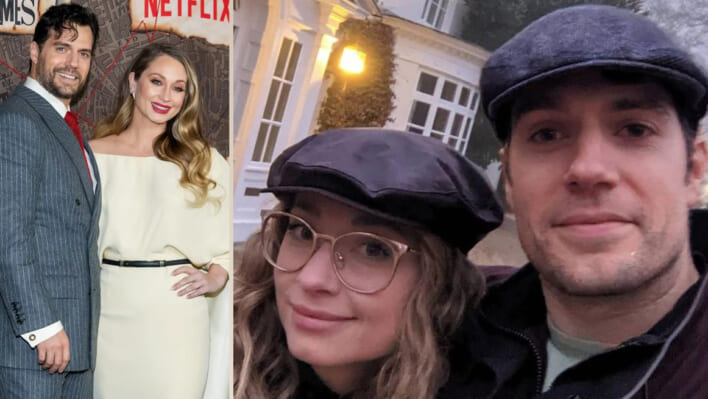 Henry Cavill and Girlfriend Natalie Viscuso Are Heating Up – Who Is the Woman Who Stole Superman’s Heart?

The “Superman” star and his lady love of the past 1 1/2 only recently made their red carpet debut at the premiere of “Enola Holmes 2.”
By Laurence Lerman    December 16, 2022

The “Superman” star and his lady love of the past 1 1/2 only recently made their red carpet debut at the premiere of “Enola Holmes 2.”

It was an unseasonably warm late October night in New York City—October 27, 2022, to be precise—when Henry Cavill and Natalie Viscuso, the actor’s girlfriend for the past year-and-a-half, made their official red carpet debut as a couple while attending their first event together: the premiere of Cavill’s latest film, Enola Holmes 2.

RELATED: Who Is Patrick Dempsey’s Wife? The Truth Behind Their Unlikely Relationship

Cavill wittily portrays the legendary Sherlock Holmes in the crime-and-action-filled period adventure—a sequel to the original 2020 family-friendly Netflix hit—but we didn’t need a detective (fictional or otherwise) to clue us in on the affection and warmth that he and Viscuso clearly share for each other!

Held at Manhattan’s luxurious Paris Theater, the event found a snappy-looking Cavill sporting a gray pin-striped suit and crimson tie, while the lovely Viscuso opted for a cream-colored gown and black heels. Arm-in-arm for their stroll down the red carpet, the pair smiled at each other and at the waves of photographers who eagerly went to work commemorating the couple’s first official photo opp.

They Made Their Red Carpet Debut in October

Cavill and his Enola Holmes co-star Millie Bobbie Brown are garnering kudos a’plenty and a surfeit of streaming activity with their latest entry in the franchise, though Cavill remains best known for his high-flying adventures in the role of Superman. The British-born actor has brought Krypton’s favorite son to big-screen life in such box office smashes as Man of Steel, Batman v.Superman: Dawn of Justice, Justice League, Zack Snyder’s Justice League and in a brief recent appearance during the end credits of another DC Comics Universe superhero’s film, this year’s Black Adam starring Dwayne “The Rock” Johnson. It seemed to be a clear indication that Cavill was returning to the role that made him famous.

But Cavill’s fleeting presence in Black Adam may very well represent his final appearance in Superman’s trademark tights and cape, at least for the immediate future. That news was revealed with DC Studios’ recent announcement that a new Superman feature film is in the pipeline and that Cavill will not be returning as the beloved superhero.

“In the initial stages, our story will be focusing on an earlier part of Superman’s life so the character will not by played by Henry Cavill,” said DC Studio’s new co-CEO James Gunn, the filmmaker-turned-executive who is also writing the screenplay for the upcoming movie.

“But we just had a great meeting with Henry and we’re big fans and we talked about a number of exciting possibilities to work together in the future,” he added.

Following the announcement of Cavill being dropped as Superman (for now), there was immediate chatter that he might return to his role as Geralt of Rivia in Netflix’s fantastical drama series The Witcher. Cavill had portrayed the magically enhanced titular monster hunter for three seasons since the show’s premiere in 2019.

Cavill confirmed he would be leaving The Witcher in October, with Liam Hemsworth set to step into the role as the show moves forward. The assumption was that he had left The Witcher to dive into a training regime to play Superman, a role has held since 2013’s Man of Steel.

But weeks after Cavill’s Witcher announcement, everything has clearly changed: Cavill isn’t returning to The Witcher, and Hemsworth is still on deck for the fourth season, with Season 3 of the show (starring Cavill) set to premiere in 2023.

That said, the relationship between Cavill and the lovely Ms. Viscuso appears to be intact with news that the two will be working on a huge project together: an adaptation of the Warhammer 40,000 game. Fans are already in a frenzy to see the two in action.

Natalie Was Once On MTV’s My Super Sweet 16

Originally hailing from Roswell, New Mexico, Natalie Viscuso moved to La Jolla, California with her father and his then-fiancé.

Not long after, she was featured on the first season of MTV’s My Super Sweet 16. Her episode description took on an undeniably ‘So-Cal” tone, informing viewers that “At 15 years old, Natalie is now living in a $5 million house and cruising around town in her dad’s Bentleys and Ferraris. What more could she want? How about being the most popular girl at school?”

RELATED: Who Is Ariana Grande Married To? Meet Her Husband, Dalton Gomez

In 2011, Natalie graduated from the University of Southern California’s School of Cinematic Arts with a bachelor’s degree, having made the Dean’s list and been a member of the Sigma Alpha Lambda and Phi Sigma Theta national honor societies.

Natalie quickly dove into the world of big-time Hollywood entertainment, which found her serving as Vice President of Television and Digital Studios at Legendary Entertainment, one of the companies that produced Man of Steel and the Enola Holmes films. It was during this time that she and Cavill reportedly met each other.

Earlier this year, Natalie left Legendary and began overseeing the TV division of Vertigo Entertainment, the L.A.-based production company behind the horror anthology series Them: Covenant.

“Genre storytelling has been the beating heart of who I am ever since I was a child,” Natalie wrote on her Instagram page after she took the new position. “I feel incredibly fortunate to be able to translate that passion into a career and to have done so with some of the best in the business.”

Viscuso and Cavill went “Instagram official” in April 2021, when they both posted photos of themselves playing chess a few days after they were seen enjoying a romantic walk together in London.

“This is me looking quietly confident shortly before my beautiful and brilliant love Natalie, destroys me at chess,” stated Cavill’s caption beneath the photo, while Viscuso’s notation humorously read, “Just teaching my dear Henry how to play some chess … or … maybe he let me win?”

RELATED: Who is Adele’s Boyfriend? Here Are the Interesting Things to Know About Rich Paul

The pair have since posted a handful of photos of one another and themselves together, but their appearance on the Enola Holmes 2 red carpet represents a dramatic and romantic step forward in the public eye. Or romantic in terms of the lose definition of modern-day romance!

Hollywood hunk Cavill has been linked to a handful of women over the years. Prior to his relationship with Natalie Viscuso, he most recently dated British stuntwoman Lucy Cork. The two met on-set when they were both working on the the box office smash Mission: Impossible – Fallout and were reportedly together for a year.

Prior to his “stuntwork” with Cork, Cavill dated college student Tara King, who was 19-years-old when she first met Cavill at the trendy London nightclub Mahiki. Tara made the scene at Cavill’s side at Vanity Fair’s 2016 Oscars party, as well as the London premiere of Batman v Superman a couple of months later. Ultimately, the two were together for less than a year.

Other women previously involved with Cavill include mixed martial artist and actress Gina Carano; English horse showjumper Ellen Whitaker, to whom he was engaged for a brief time before calling off their pending nuptials; and, for a brief time, actress Kaley Cuoco, who later told Hello! Magazine that she was not used to being part of such a high-profile relationship.

“I had no one following me until I met Superman—I’ve been in this business for 20 years, and my whole life I could go anywhere, do anything,” Cuoco said. ‘There had not been one paparazzi photo of me until like several months ago.”

“The recognition was crazy,” she added.

That recognition factor is undoubtedly on the rise in the case of Cavill and Viscuso’s relationship.

Henry Urged His Fans to “Be Happy with Me”

Only a couple of months after the pair went public with their romance, Cavill made a lengthy Instagram announcement regarding what he felt to be an increasing level of animosity he saw on his feed regarding his private life. While Cavill did state that he appreciated the “passion and support” by people who were speculating on his personal and private affairs, it had grown to a point where there was a disturbing deluge of comments by those “expressing your disdain and showing your displeasure through a surprising variety of ways.”

RELATED: Who Is Katie Holmes’ Boyfriend? What You Need to Know About Bobby Wooten

“Your ‘passion’ is misplaced, and it causes harm to the people I care about most. Even your most conservative of negative assumptions about both my personal and professional life just aren’t true,” Cavill wrote beneath a photo of himself and Viscuso. “Let’s embrace this age of social enlightenment together, and move forward with positivity. I am very happy in love, and in life. I’d be enormously grateful if you were happy with me.”

“If you can’t bring yourself to be happy with me, then at the very least try to do yourself proud and be the best version of yourself,” he concluded.

Cavill, you couldn’t have said it better. Let’s all strive to be the best versions of ourselves.

We’re hoping that the best versions of all who are concerns continue to thrive in the future!

Who Is Chris Evans’ Girlfriend, and What Does His Love Life Say About Dating?