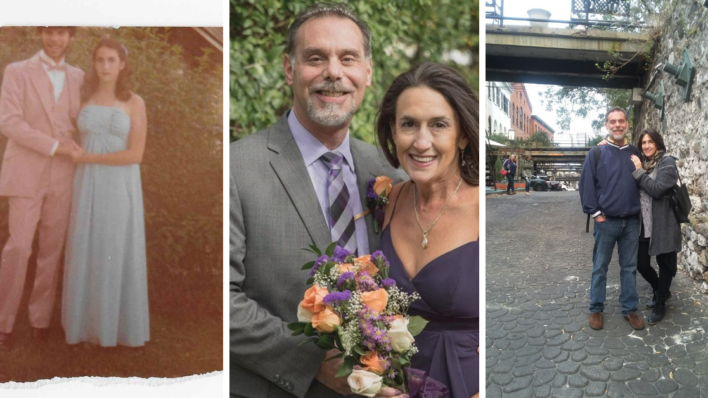 When Ami and Stephen Kardos arrived at their 30th high school reunion together, their friends assumed they had been together

When Ami and Stephen Kardos arrived at their 30th high school reunion together, their friends assumed they had been together

When Ami and Stephen Kardos arrived at their 30th high school reunion together, their friends assumed they had been together all those decades. But the reality was something far more complicated — and special.

Ami and Stephen originally met in 1980 in the art room at Northeast High School. “My name is Ami,” she introduced herself. “Can I use your locker? You can keep your helmet in the art room.”

That was the beginning of a relationship that quickly evolved. They went from sharing a locker to sharing a first love, but the relationship didn’t last.

Not equipped for love

Stephen rode a motorcycle and gave Ami rides to school. He worked long hours after school to support his mom after the death of his dad, and he didn’t get to see Ami as often as she would have liked.

But he kept his feelings bottled up. Eventually, distance and lack of communication led the two teenagers to break up.

“I couldn’t fully explain or communicate my frustration,” he said.

Decades went by, and life took the two in different directions. Ami got married young, marrying at 20 and divorcing by 30. She then married her second husband at 30,  and they had two children before separating.

Stephen continued to work long, hard hours and then joined the Army before going to college and getting married himself. He had a child and ended up getting separated after almost 20 years of marriage.

In 2011, Stephen emailed Ami after he heard that his former friend, also Ami’s brother in law, had passed away. That was the beginning of keeping in touch over email and phone calls until Stephen and Ami finally decided to meet up.

She almost tried to make a quick exit after a short visit, but ended up changing her mind. “I don’t know why, but I like to think it was an intervention by my late father or my sister,” she said. “It was like someone said, ‘You’re not leaving so fast.’ ”

They were soon, again, inseparable – though this time as people in their fifties.

“It felt like we had just gotten together, and then we would look at the time, and eight hours had passed,” said Ami. “I had never experienced anything like that,” said Stephen.

They talked about all the factors that had broken them up in high school, and got closure for their first relationship, which strengthened their second one.

“I love that we have this synergy, that we intrinsically get each other,” Ami said.

“I know that he loves and cherishes me as-is, that I don’t have to put on airs or mince words. I love that I laugh every single day, that he is willing to put himself out if it makes me happy, and that his heart is huge and mushy.”

That’s why when they attended their 30-year high school reunion together, everyone assumed they had been together all that time.

They married in 2015 and now live with their two cats, Puddin’ and Spanky.

When love is meant to be, it really can find a way. Even separated by decades and distance, this couple did find each other once again. And perhaps they had to go their separate ways to learn the lessons needed to make their love truly last.