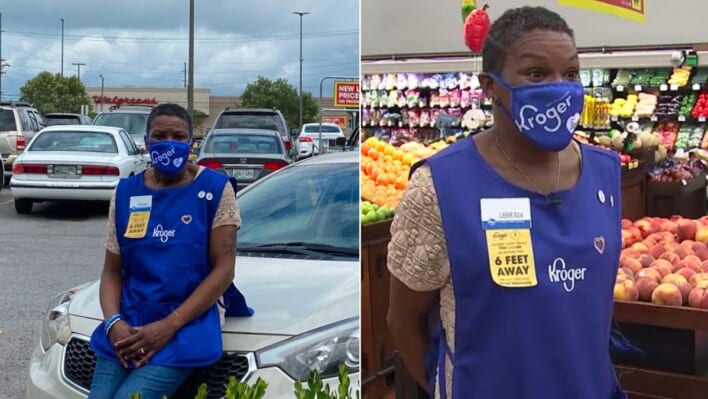 LaShenda Williams gives her colleagues and customers a friendly smile, a helping hand, and a word of encouragement.
By Amanda Shaw    November 4, 2022

LaShenda Williams gives her colleagues and customers a friendly smile, a helping hand, and a word of encouragement.

When LaShenda Williams lost two part-time jobs that were keeping her afloat, she nearly gave up. It wasn’t that she had never faced rejection before—in fact, she was used to it.

But here she was in Nashville, Tennessee—a move of over 400 miles from where she grew up, in foster care, in Mobile, Alabama.

She Went Searching for Family

After years in the foster care system, Williams had decided to go find her biological family. It was a big risk, leaving everything she ever knew and hoping to find love in a family she didn’t even know. But she was hoping for big rewards. Unfortunately, it wasn’t meant to be.

“I spent my life moving from foster care to foster care,” Williams recounts, “dealing with child abuse and things like that. In the end, nobody wanted me, and I stayed in the system until my senior year.”

RELATED: Woman Brings 97 Homeless Dogs Into Her Home During Hurricane – Now She’s Trying to Get Them Permanent Homes

In Nashville, her biological family also rejected her. Alone, and in a strange, new part of the country, Williams tried to soldier on. And then she lost the two jobs that were feeding her. It’s no wonder she wanted to give up: her feelings of helplessness stemmed from decades of built up anger, sadness, and feelings of failure.

They also stemmed from years of being told that she wasn’t capable and that she would never make it in life. Struggling with a learning disability, Williams was placed in special education. She spent most of her school years being told that she was stupid and that she’d never be able to live a full, independent life. Later, when she was looking for work, rejection from man employers because of her learning disability seemed to confirm all those negative thoughts. Williams was desperate.

Homelessness Found Her, but It Wouldn’t Define Her

And that’s how she ended up living in her car. Little did she know that that low point in her life would lead her to living the successful, independent life she always dreamed of.

Williams often parked her car in the lot of a Nashville Kroger grocery store. At night, she would pull away to avoid alerting anybody to the fact that she was living in her car. In the day, she would go in the store to get a few things to eat and talk to the staff. Everyone there was friendly, striking up a conversation and exchanging pleasantries with their regular customer. Williams would laugh and joke with them: “You know I’m going to work here one day.” As it turned out, it wasn’t a joke.

RELATED: Homeless Man Leaves His $10,000 Inheritance on a Bus Bench – Here’s Why 2 Strangers Walk Away With It

One day when Williams was picking out something to eat, the associate manager Jackie Vandal told Williams that Kroger’s was having a job fair—and that, if Williams was serious about her little jest, she should apply.

Williams was nervous. She worried about her resume and if she would be able to fill out the application to their standards. She was anxious about facing failure yet again. But Vandal insisted. In Williams, she saw someone who had a “warm, caring personality” and who she thought would be dependable. After all, Williams came into the grocery store every day. She seemed like a natural fit!

The day of the job fair, Vandal sat down with Williams and helped her every step of the way along the application process. “No one had ever done that for me before,” Williams said. “She made sure I had what I needed.” For the first time in Williams’ life, someone was helping her, looking out for her, and telling her that she was capable.

And when Vandal told Williams that she was hired, she almost couldn’t believe it. It was the chance she needed. And to think that being forced to live in her car is what brought her here in the first place.

RELATED: Server Refuses to Give Thirsty Homeless Man a Glass of Water – Stranger Who Heard Their Conversation Follows Him

Williams promised Vandal that she would show up every day and work hard—and she’s kept her promise. Within a few months on the job, Williams’ work ethic and positive attitude were rewarded when she was promoted to full-time checkout associate. And Williams is not living in her car anymore. After securing an apartment, it was her Kroger colleagues who helped her furnish it.

“From every department to the front end, they are my family,” Williams said. “This is where I belong…it just fills my heart with joy.”

Putting the Happiness of Customers at the Forefront of Her Mission

In small but important ways, Williams gives her colleagues and customers something that was denied to her most of her life, until she met them: a friendly smile, a helping hand, a word of encouragement.

“If I could just put one smile on someone’s face or put a laugh in someone’s heart and tell them ‘I love you’ and ‘I’m proud of you’—that’s what I try to do every day.”

If only the naysayers from Williams’ childhood could see her now. With hard work and unwavering faith, Williams turned her life around and proved that not only is she capable of living a full life, but she’s also positively impacting the lives of others.