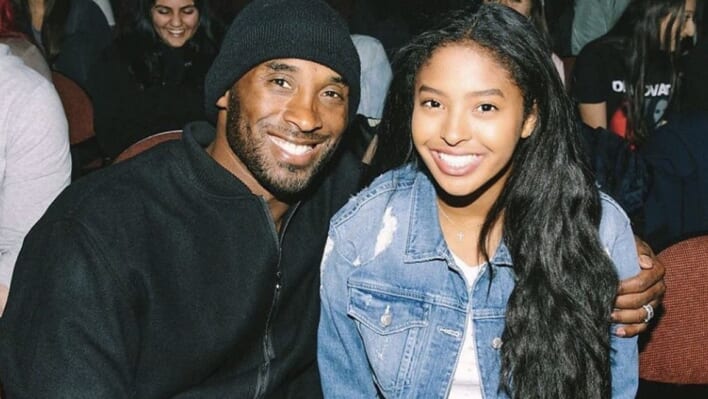 Natalia Bryant, daughter of late NBA star Kobe Bryant, claims that she’s being stalked by Dwayne Kemp. Kemp has a criminal history and may possess a firearm. Let’s talk about the dangerous man that got Bryant into a courtroom.
By Bianca Mercuri    December 16, 2022

Natalia Bryant, daughter of late NBA star Kobe Bryant, claims that she’s being stalked by Dwayne Kemp. Kemp has a criminal history and may possess a firearm. Let’s talk about the dangerous man that got Bryant into a courtroom.

Natalia Bryant, daughter of the late Kobe Bryant, is scared for her life due to a stalker’s obsession and has been for too long. The LAPD is equally alarmed considering her alleged stalker has a criminal history involving guns. This situation has elevated to the point of sending Bryant straight to court to get a restraining order against 32-year-old Dwayne Kemp.

And finally, Bryant was granted a restraining order by the court against the man who terrorized her for years! Dwayne Kemp has been ordered to remain at least 200 yards from Bryant as well as staying away from her home, work, and school.

RELATED: The Truth Behind Kobe Bryant’s Troubled Relationship With His Parents

Let’s get to know Bryant a little bit better and give context to this insane train of events. How did the passing of her father contribute to this, and how is she currently dealing with the situation at hand?

Who is Natalia Bryant?

Natalia Bryant is the daughter of former professional basketball player Kobe Bryant. Kobe Bryant was a shooting guard and spend his entire career with the Los Angeles Lakers in the NBA. On January 26, 2020, Kobe Bryant and his 13-year-old daughter Gianna along with others died in a tragic helicopter crash.

Natalia Bryant is 19 and part of a University of Southern California sorority house. She’s the oldest child of Kobe and Vanessa Bryant as well. She finally opens up about her two-year scare with this former criminal and how this alleged stalking came to be. One incident even supposedly occurred at USC.

Bryant states that Kemp attempted to make contact two years ago. At the time, she was only 17 whereas Kemp was 30. Apparently, he’s under the impression that the two share a romantic relationship but Bryant says she’s never met or had any kind of contact with Kemp. She claims he’s done everything in his power to make contact with her in the last two years and is extremely fearful of him. He has even gone to the extent of showing up at her school, once at her sorority house and another time at one of her classes as he was roaming the building with flowers.

What makes this situation significantly more dangerous is that Kemp has been arrested and convicted of at least four crimes with one involving a gun. He’s also threatened to buy an AK-47 and fully automatic Glock, making his affinity for firearms known. While it’s unclear if he currently owns one, he was previously in the process of acquiring another in which the sale is pending.

Bryant also claims that Kemp sent her a DM including a photo of her late father along with the message, “Thankful For Him Birthing You, Hopefully We Can Birth Him… ‘Kobe’.” Everything accumulated has made the LAPD scared for Bryant’s well-being and has encouraged her and the court to follow through with a restraining order request. The request asks that Kemp stay a minimum of 200 yards away from herself, USC, her sorority house, her car, and her job.

The Dangers of Living a Public Life

Bryant has never had a quiet life. Her father Kobe was an extraordinarily well-known and well-loved member of the NBA. He lived publicly, and unfortunately, that meant that so did his children. After his death, his family did get an influx of immediate attention. Most of it was well wishes, love, and condolences… but it seems that some of that attention was unwanted and unwarranted.

This is an issue that many celebrities face. Stalkers and unwelcome attention are not uncommon for those who put themselves out there. But that doesn’t make it any easier or any less scary to deal with. While we tend to romanticize life in the spotlight, it’s not a simple life to lead. There needs to be a level of compassion for influencers, celebrities, and other individuals who live a highly publicized life – whether that’s of their own volition or not.

Natalia Shows Strength In Speaking Out

Bryant’s priority at this moment is her safety and the restraining order is a step in the right direction. One thing is for certain, Bryant never hid from what truly is a harrowing story for anyone to endure for over two years. Though Bryant lived in fear of the correct actions, “I was in fear, for the longest time, that if I did block him [on social media], he would act in rage or get angry,” she still managed to do the right thing.

RELATED: Quick-Thinking Man Acts Like Woman’s Friend To Save Her From Creepy Stalker

Bravery is never easy. While fear can be immobilizing for many of us, sometimes you have to step out of it, if only for a moment, and ask for help. In this case, the help came from speaking up, the police, and a courtroom.