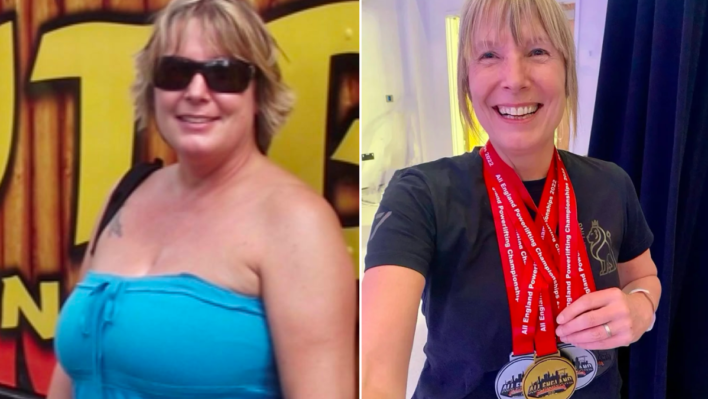 How one woman’s health journey led her to become a gold medal winner.
By Amanda Shaw    January 24, 2023

How one woman’s health journey led her to become a gold medal winner.

58-year-old Kelly Clark hated exercise. And quite simply, she didn’t think she had the time for it. She often travelled for work, which meant staying in hotels and eating takeout food. It seemed impossible to maintain a healthy lifestyle this way. Over the years, Clark’s health deteriorated and she gained weight.

But the real wake-up call came when she was just 49 years old. She had pain in her side, and general body aches kept her from performing simple tasks, like closing the trunk of her car and reaching for things above her head. She found it painful to even carry a bag on her shoulder.

RELATED: Concerned Family Call Police on Elderly Man Who Wants to Drive Across America – The Cop Who Arrives Has Different Plans

Like many people, she tried to live with it, but soon the pain became too much to bear. Clark decided to visit her doctor. The then 49-year-old was shocked by the diagnosis: osteoarthritis. The solution? “A cocktail of drugs,” as Clark put it.

“That was the real trigger,” she said. “I don’t want to carry on being like that.”

Powerlifting Was Clark’s Opportunity to Shine

The medications interfered with her sleep. Overweight and popping pills just to keep the pain at bay, Clark knew that something had to change. She had to put healthier routines into her life. She knew she had to take better care of herself.

So Clark started powerlifting. Over the next nine years, her regular training helped Clark lose a third of her body weight. The pain faded. She can now bench 165 pounds and says she’s fitter than she was in her 20s. Most importantly, she was able to get off all her medications. That was the biggest relief.

But Clark didn’t stop there. Reaching her fitness goals and feeling better than ever, Clark was inspired to push herself even further in powerlifting. One day, when she was volunteering at a Special Olympics event, Clark thought to herself: I want to compete!

She qualified to compete in the World Powerlifting Championships in 2019; then, the South Yorkshire resident represented England in the 2021 World Bench Press Championships. Clark found that with the added element of competition, she was more motivated than ever.

“Both competitions took place on the same day,” Clark remembered, “which was quite difficult. You have to keep your body weight within a certain limit, so I had to do two weigh-ins. I was running between the weighing room for the second competition and the podium.”

Life Can Shock You in Incredible Ways

Thinking back to where she was with her health less than a decade ago, the journey has been like a dream for Clark. “It’s changed my life in so many different ways. I’ve gone from totally unfit on arthritis medication to coming off it and lifting.”

Her transformation is indeed inspiring. Said Clark, “If someone had told me I would be this mobile, let alone competing in international competitions ten years ago, I would never have believed them.”But there she is, showing all of us how to age, not just gracefully, but powerfully.