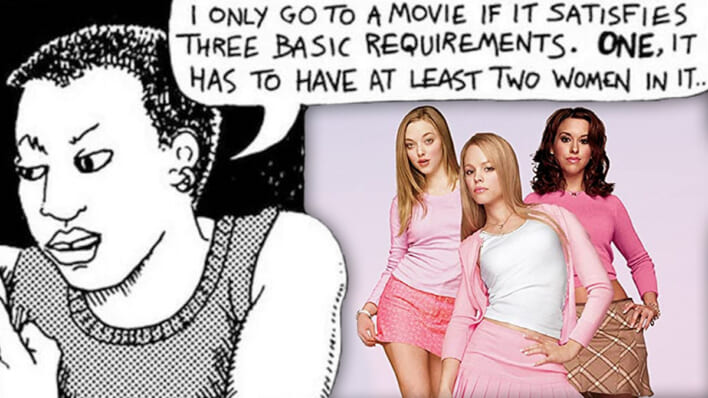 What Is the Bechdel Test, How Do You Pass It – And Does It Still Matter?

Coined in 1985, the Bechdel Test aimed to reveal the sexist tropes that ran rampant in Hollywood films. Nearly 40 years later, though, female representation in film remains a common issue.
By Jenna Pearl    July 15, 2022

Coined in 1985, the Bechdel Test aimed to reveal the sexist tropes that ran rampant in Hollywood films. Nearly 40 years later, though, female representation in film remains a common issue.

Talking about female representation in cinema is a dicey endeavor. On one hand, film reviewers are looking at movies through a feminist lens and finding them to be lacking. On the other hand, there are die-hard fans upset whenever their beloved franchises are replaced with female characters.

With a topic so complex and so divisive, it can be helpful to turn to pre-made rubrics to determine how well a film represents marginalized groups. Do female characters talk about more than men? Are LGBTQ+ characters more than a stereotype? Are the characters more necessary than a lamp?When it comes to measuring the representation of women in film, the most famous evaluation is the Bechdel Test. But what exactly is it, and how do you pass?

What Is the Bechdel Test?

The Bechdel (pronounced beck-dell) Test was first created in 1985 by cartoonist Allison Bechdel. In one installment of her comic strip Dykes to Watch Out For, one character informs the other that she will only go to see films in theaters that have adequate female representation. She quips that the last film she was able to go see was Alien in 1979.

RELATED: Emma Watson Invites Men And Women To Work Together

To pass the Bechdel Test, a movie has to meet three criteria. The film must have at least two female characters whose names the audience knows. At some point in the film, they must speak to one another. And the conversation has to be about anything besides a man.

That’s it. That’s the whole test. It sounds bizarrely simple! And yet most films still fall short of passing the test.

The Bechdel Test in Action

A classic example of a film that passes the Bechdel Test with flying colors is The Wizard of Oz. Dorothy talks with women throughout the film. Though she does talk about the eponymous Wizard of Oz with Glinda the Good Witch, all of her other discussions with female characters in the film focus on anything but men. The women in the story have motivations beyond nabbing a man, and the movie is more interesting for it.

An example of a film that oddly fails the Bechdel Test is Marvel’s Avengers. The film only has three named female characters — Maria Hill, Natasha Romanoff, and Pepper Potts — who never interact with each other.

Given director Joss Whedon’s past experience with properties like Buffy the Vampire Slayer — though admitting he’s been a controversial figure for his treatment of women on-set since — it’s not surprising that all three characters are shown to be strong and multi-dimensional, but they spend the whole film surrounded by an overwhelmingly male cast.

To their credit, over a dozen Marvel films do pass the Bechdel Test, and the films portray varied and nuanced depictions of women.

Even the acclaimed 2018 film A Star is Born failed the Bechdel test miserably. While Lady Gaga’s character is a force to be reckoned with, the only time she speaks to another woman is about her love interest.

The Problems and Flaws with the Bechdel Test

The Bechdel Test was never meant to be a definitive standard by which all films should be judged. A good film with feminist themes can fail the Bechdel Test or a highly sexist film to pass it.

Showgirls is problematic from start to finish and yet it easily passes the Bechdel Test. Mean Girls also passes and also presents mature, feminist themes. Meanwhile, 2013’s Gravity fails the Bechdel Test despite closely following a female protagonist (in its defense, the film only has two characters).

The Bechdel Test isn’t a perfect measurement, but it’s worth taking a look at.

The Bechdel Test is best used as a jumping-off point in considering the female representation in a film. It’s considered more of a thought experiment. If a film fails, why does it fail? Are the female characters written in such a way that they only exist to fill a role in a man’s story? Are they only shown to be interested in romantic relationships? Or are there so few women in the movie that they don’t even get the chance to interact?

The 2022 rom-com Hulu film Fire Island is a case in point. The story follows two queer Asian men with little ‘adequate’ and ‘stereotypical female representation’ according to one Twitter user. Bechdel herself responded with, “Okay, I just added a corollary to the Bechdel test: Two men talking to each other about the female protagonist of an Alice Munro story in a screenplay structured on a Jane Austen novel = pass”.

Why the Bechdel Test Still Matters

Given that the Bechdel Test is almost 40 years old, it’s easy to assume it’s become obsolete. After all, female representation in media must have improved in the last four decades, right?

Well, of course, it has. Particularly as female directors are allowed more opportunities to tell their stories, audiences have become accustomed to seeing stronger, more nuanced portrayals of women on the silver screen. That said, we haven’t progressed nearly as far as we’d like to think.

Hollywood still has a way to go when it comes to female representation. Despite making up half the population, female characters made up only 34% of all speaking roles in 2021. Of those roles, 6 out of 10 were white women, and women of color were only represented in a handful of films, such as In the Heights and Encanto.

And while there are more female directors now than in previous decades, there are still relatively few of them. According to a report by Forbes, of the 100 top-grossing films of 2021, only 12% had female directors. With relatively few female characters and even fewer female filmmakers getting a chance to tell their stories, modern cinema still has room for growth.

Other Versions of the Bechdel Test

It’s worth noting that the Bechdel Test was first referenced by a lesbian character. It was designed in part to help us evaluate films from a queer female perspective. Since most films still follow a male protagonist, gay women (whose interests, understandably, often don’t involve a straight man) continue to struggle for positive representation in media – that is, when they’re represented at all.

Unsurprisingly, other marginalized groups have their measurements for representation in film. Some were even inspired by the Bechdel Test! Deggans’ Rule (also called the Race Bechdel Test) measures the representation of people of color in a movie. To pass Deggans’ Rule, a movie has to include at least two characters of color while not focusing on race-related themes.

Then there’s the Vito Russo Test, also referred to as the gay Bechdel Test. If a movie features an overtly gay character who has more characterization than just their orientation and gender identity, and their presence isn’t so inconsequential that they can’t be easily edited out, then it passes the Vito Russo Test.

Other tests speak to the typical quality of female representation in film. The hilariously-named Sexy Lamp Test prompts movie-goers to ask themselves if a female character couldn’t be swapped out with a novelty lamp without altering the plot.

To pass the Mako Mori Test, a film must have at least one female lead, who undergoes a character arc that isn’t focused on a male character.

All of these tests point to the same message, the Bechdel test is not perfect and Hollywood has a great opportunity to tell rich, original, compelling stories. They just have to portray (and hire) a wider array of people.

Inspirational Anime Couples That Are Absolutely Perfect for Each Other

Island of the Dead Dolls: What Is Mexico’s Scariest and Most Haunted Tourist Trap?

The Bloody True Crime, and Shocking Acquittal, Behind Hulu’s Candy