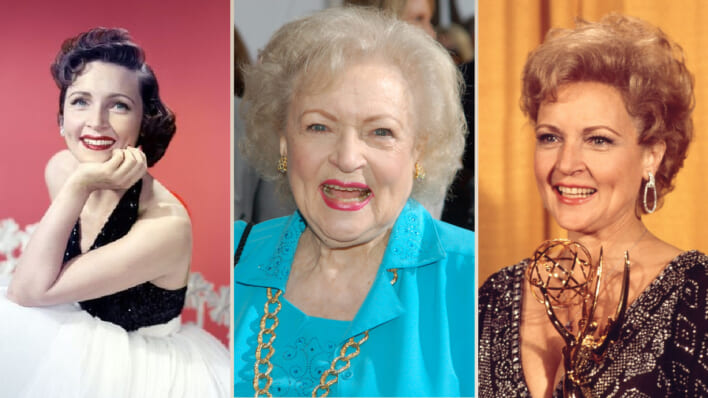 Betty White was funny and fierce. A fixture in pop culture, her legacy includes eight Emmys, a Guinness World Record for her legendary career, and a heartwarming outlook on death.
By Mikaela Lucido    September 19, 2022

Betty White was funny and fierce. A fixture in pop culture, her legacy includes eight Emmys, a Guinness World Record for her legendary career, and a heartwarming outlook on death.

Across social media in late 2021, it felt like the whole internet was rooting for Betty White to make it to her 100th birthday. Who could blame them? The Golden Girls actress spent decades bewitching us on and off the screen.

RELATED: Betty White Revealed Why She Never Had Kids – And It’s an Important Lesson for Everyone

And while White passed away at 99 weeks shy of turning 100, we can rest assured she was anything but unprepared. Actor Ryan Reynold’s said it best on his Proposal costar, “The world looks a little different now. She was great at defying expectation. She managed to grow very old and somehow, not old enough. We’ll miss you, Betty.”

Betty White and Her Mother’s Inspiring Perspective on Death

An only child born in 1922, White’s early childhood was set against the backdrop of The Great Depression. Life was far from easy. Still, growing up, White witnessed her mother Tess respond to loss with surprising hope. Reflecting on her mother’s optimism, the Mary Tyler Moore Show star once told Katie Couric, “Whenever we’d lose somebody, she’d always say, ‘Now, they know the secret.’”

RELATED: 40 Betty White Quotes To Remind You To Stay Young At Heart

According to White’s mother, there was no way of truly knowing what happens in or after death until you’d experienced it yourself. Simply put, the White family secret involved accepting the great unknown.

Through the decades, as she came closer to facing that unknown, Betty White showed us how important it is to lead a fulfilling life. For her, “feeling young” meant committing to kindness and selfless service.

How Betty White’s Love for Animals Sustained Her

All her life, White was rooted by her devotion to animal rights and their welfare. When she wasn’t on set, she was working with the likes of the Morris Animal Foundation and the Los Angeles Zoo. In 2006, the Los Angeles Zoo even named her “ambassador to the animals.” But her advocacy didn’t stop at working with animal rights organizations. If an acting project involved the mistreatment of an animal, she refused to take it on.

Betty White was steadfast in her principles and self-confident, always looking out for any animal’s well-being. They brought her immense joy. It seems only natural she wanted to give back. Unsurprisingly, the comedian saw animals as one half of her life. (The other, of course, was show business.)

As a child, White’s parents encouraged her to embrace an attitude of wonder when it came to animals. This enthusiasm impacted her activism greatly, even after she passed. On her hundredth birthday, Betty White fans were encouraged to donate to their local animal shelters. Dubbed the #BettyWhiteChallenge, the tribute was a clear mark of how powerful of an advocate she was.

Love was at Betty White’s core. And if her compelling humor or activism didn’t give this away, it was her final words. According to her assistant, the actress spoke her late husband’s name as she drew her last breath: “Allen.”

Betty White and Allen Ludden married in 1963. Through the marriage, White became stepmother of Ludden’s three children: David, Martha, and Sarah. The couple spent 18 years together before Ludden died in 1981 due to cancer. Notably, White never remarried and wore a ring Ludden gave her for years after his death.

RELATED: 25 Wanda Sykes Quotes That Are Both Funny and Inspirational

Not long after Betty White’s death, Vicki Lawrence, co-star and longtime friend, shared a short anecdote about White and Ludden. In the moving vignette, Lawrence described how the couple asked for a moment alone while at a Christmas party. They sat and dined quietly in Lawrence’s bedroom by the window, the city and party fading in the background.

White died 40 years after her husband. It might be heart-wrenching to think of the grief she must have carried through those decades. But it would be a disservice to everything Betty White embodied if we didn’t see how she carried Ludden everywhere. Her dedication to bringing levity to audiences across the globe, animal welfare, and her family was anchored by unwavering love.

The Secret Betty White Gave Us

With eight decades on television under her belt, and a breadth of life experience, Betty White was a light for many. She wasn’t just Rose or Sue Ann or the eccentric grandmother in The Proposal. Her life could never truly be watered down into roles on screen or at home as a wife and stepmother. She understood this deeply, once stating her desire to be remembered for her love for animals.

RELATED: Love is Your Legacy and Happiness is Your Myth – Here’s Why

For those of us left behind, we might not know the secret to what comes after death. But Betty White left us a secret of her own. She showed us firsthand how enriching life can be at any age, so long as you find the people and causes you care about. In the end, Betty White’s legacy is this: what’s untamed and unexpected isn’t so scary after all.