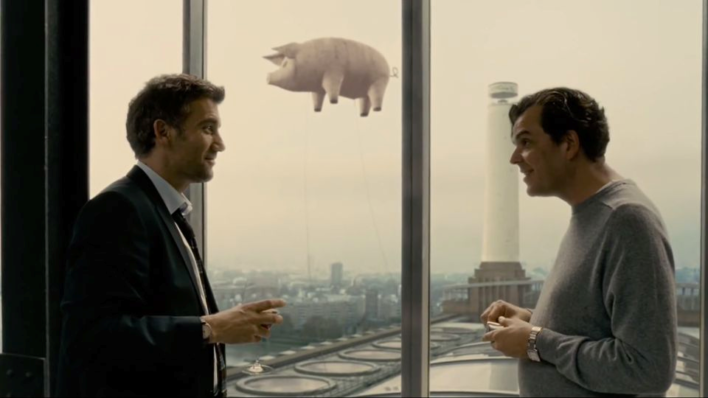 In a soul-crushing dystopian landscape, this film offers a glimmer of hope.
By Crystal Hoshaw    August 4, 2022

In a soul-crushing dystopian landscape, this film offers a glimmer of hope.

After I saw ‘Children of Men’ in the theater as a sixteen-year-old in 2006, I fell into a depression and cried in my room for three days. While that may not exactly be a glowing review, the movie both touched and unnerved me deeply. Director Alfonso Cuarón’s beautiful cinematography is at once breathtaking and heart-rending as he tells the story of a broken society grappling both for survival and humanity.

In a not-so-distant future in which the human race has become infertile, the film opens on a scene of protagonist and former activist Theo in a crowded coffee shop. A breaking news story flashes on the TV, reporting that the world’s youngest person—and the last symbol of hope for many—has been killed at eighteen years old.

Set in a crumbling version of London deemed the last ‘safe’ place on Earth, the film touches on social and political themes that were already dominating headlines at the time of release, amplifying their relevance by projecting them into an imagined future where they could be played out to one of many logical extremes. At the time, the images I saw on screen felt like a premonition.

Between the threats of environmental degradation, fossil fuel wars, the then-prominent narrative of terrorist hostility toward the U.S., and resulting animosity toward immigrants and minorities, I couldn’t help but feel as though what I saw in the film was more than fiction.

It was like looking into a crystal ball and seeing the future. As a thoughtful and sensitive person, I felt so little hope about the world I was inheriting.

A Theory of Hope

In her book, Hope in the Dark, writer Rebecca Solnit characterizes hope as “giving one’s self to the future, thus making the present inhabitable.”

Set in the backdrop of a film like Children of Men, this definition becomes more than a positive aphorism—it’s a strategy for survival. In this imagined future landscape, the present is very nearly uninhabitable, to the extent that advertisements for a suicide drug called Quietus are a commonplace and seemingly accepted alternative to enduring life as the world crumbles. For many—both in Cuarón’s fictional world and in the real, present-day one—it’s easier to slip into despair, to numb out, to stop feeling altogether.

Even protagonist Theo has given up his activism days after the death of his son, opting for a newfound ‘realism’ involving resigned acceptance of the state of affairs. However, he’s betrayed by his constant chain smoking and trained, unhesitating shots of whiskey that he pours discreetly into his coffee. As much as he may rationalize his outlook, he’s clearly affected.

On the subject of hope, Solnit writes that it’s “a darkness as much of the womb as of the grave.” Hope is a balancing act between symbolic birth and death, the perfect metaphor for a movie about a world where birth seems to have become impossible.

However, after Theo is kidnapped by his former lover and political activist Julian, he’s charged with the task of securing transit papers for a young refugee named Kee, who turns out to be carrying the first baby conceived in eighteen years in her womb.

Now Theo and his young charge are very literally balancing between birth and death, as the gift of life also makes Kee a prime target for any number of power-hungry agents who might want to use the baby for their own ends. Death and birth turn out to be tightly interwoven, perhaps even indistinguishable.

Solnit’s description of the dual-nature of hope is very much like Nietzschean nihilism, a response to the inevitable contradiction of what the German philosopher called the ‘Christian-Moral’ worldview of his day.

That worldview involved the belief that each individual was a member of God’s flock and God the divine shepherd. This perspective created an order to the world, gave humanity a role, a place, and a protector, and provided comfort via ‘God’s plan’ whenever unexplainable or seemingly unjust things took place.

However, for Nietzsche, this was a cosmic fantasy at best, as the prevailing rationalism and scientific spirit of the time made it impossible to support.

“This antagonism,” writes Nietzsche in The Will to Power, “not to esteem what we know, and not to be allowed any longer to esteem the lies we should like to tell ourselves—results in a process of dissolution.”

This dissolution is what we see happening in full force on the world stage in Children of Men. Society is quite literally dissolving, with no truth or hope left to cling to—especially now that the youngest person on Earth has been killed. There is no shepherd to guide the lost flock amidst the chaos of a crumbling world until Theo himself unwillingly becomes that shepherd.

A loss of hopeful innocence

The fact that he’s given up his activism, his sense of purpose, even perhaps his dignity, actually makes him perfect for the role. He no longer has his own agenda. Thus, he can act without muddying the mission with his own personal whims, opinions, values, or objectives. For Nietzsche, Theo’s former purposelessness is existential paralysis, a mourning period for what once was—his son, his beliefs, and the hope for a better world.

Had he not met Kee, he might’ve stayed this way forever. And yet, if he hadn’t been this way, he wouldn’t have been the perfect candidate to deliver Kee to safety. Having emptied himself completely of hope, he’s primed to be filled with something else. Theo can give himself wholly to a new purpose when it’s thrust upon him because he has nothing else standing in the way. This new purpose transcends the ego completely: Theo becomes an agent for something larger than himself.

While Theo’s mission is to very literally save the human race from extinction, it represents a deeper existential transformation.

From the existential void to the cosmic womb

Anyone who has had to let go of their old way of seeing, believing, and being can likely relate to Theo’s initial nihilism. If everything you once believed in or cared about is no longer true, how can you find purpose in anything?

This stage in the existential mourning process can be a path into despair and further existential paralysis (the grave), or it can be the birthplace of a new, more expansive purpose to emerge (the womb).

The paradox of nihilism

Nihilism offers a paradox in that it presents an invitation to go beyond it. It offers the fertile ground for new possibility. By completely letting go of hope and free-falling into nihilism, the attachment to any single outcome is severed.

Thus, all things are possible.

This perspective on hope and nihilism ultimately illustrates that hope can only take us so far. Certainly, it can help us get through difficult times, but only by allowing us to escape from them.

The opposite of freedom

This dissociation is the opposite of freedom. It’s an existential trap that has us constantly wishing we were somewhere else. The doorway from hope to nihilism eventually leads to complete acceptance of what is, without the need to push it away or cling to it.

This acceptance is the true meaning of presence: The surrender of all agenda to face each moment head on, without wishing to escape, alter, or manipulate life as it unfolds in front of us.

Freedom and the loss of the self

This is the existential freedom Theo experiences when he becomes Kee’s deliverer. He simply responds to what’s needed in the moment, without thought of his own desires. His surrender is so complete that in the end he gives his life for it, as he reveals his fatal wound to Kee in the rowboat they share moments before she’s rescued in the movie’s final scene.

The true meaning of existential freedom is freedom from the agenda of the small self. It engenders a complete surrender to the present moment that doesn’t require some heroic mission to save humanity. Instead, it’s available to every one of us when we give ourselves wholly to the present moment—whatever that moment might be.