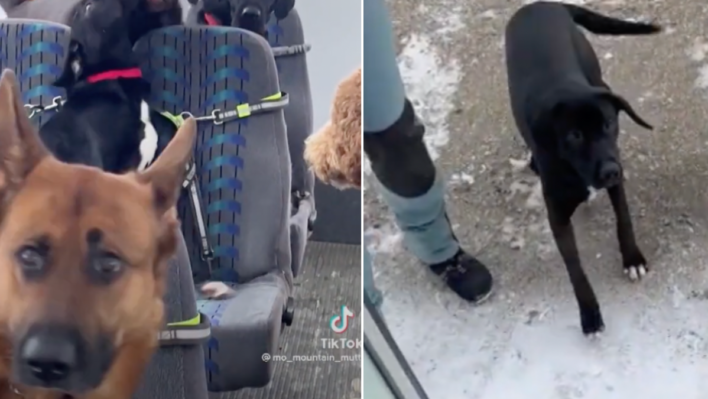 Dog bus attracts the attention of millions of people.
By Amanda Shaw    January 23, 2023

Dog bus attracts the attention of millions of people.

A video of a dozen dogs boarding a bus has gone viral. The reason? It looks hilariously similar to a bus picking up kindergarteners, or better yet, eager tourists on their way to adventure.

And these are the cutest tourists you’ll ever see.

“Good morning, everyone,” says co-owner Lee Thompson into the bus’s PA system, “and thank you for riding with Mo Mountain Mutts.”

That’s right. These sightseers out for a day of fun and adventure are dogs, not humans.

It’s Lee’s wife Mo who started the business—albeit, not on purpose. Mo Mountain Mutts now has over 340,000 followers on Instagram, but Mo’s dog-walking days started much more modestly. In an interview with NPR, Mo Thompson insists that she “never set out to be a dog walker.”

Rather, she did it as a favor for her friends and co-workers. Gradually, that part-time endeavor grew until Mo was walking a few different packs of dogs at a time; at one point, she called her husband Lee in to help and Mo Mountain Mutts turned into a full-time job.

RELATED: Homeless Teen Steals a Wallet in a Bar – The Owner ‘Punishes’ Him in an Unexpected Way

The wife and husband duo make their rounds, picking up the dogs from their homes. The doors open on the bus, and each dog is greeted by name as it eagerly boards and chooses a seat. But not just any seat. The dogs know which particular seat is theirs, and all of the seats have been specially adapted with canine seatbelts. Just like humans, some like to sit next to a friend during the ride while others prefer to sit by themselves. Some of the more responsible ones wait at their bus stop all on their own.

In fact, it’s this similarity to humans that has garnered so much attention on the internet. Followers of Mo Mountain Mutts on social media can watch short videos of the dogs, learn their names and personalities, and see the same ones over and over. Mo often posted about her clients’ adventures on social media so that the dogs’ families could see what they were up to during the day. “Everybody check on their trail body!” She can be heard saying to the dogs in one video.

But when the Thompsons bought the bus, the whole world noticed.

A TikTok video of the dogs riding the bus has been viewed 55 million times. And now people from far outside the business’s service radius in Alaska love to comment on their favorite users of Mo’s dog-walking service.

Once all the dogs are picked up, they head to their destination for the day; it could be an off-leash dog park, a hike or a swim. When the bus doors open, the dogs get off in a surprisingly orderly fashion, ready for a day of sightseeing with their buddies.

But there’s also learning—or rather training—involved. “Dogs, ready! Let’s go!” Says Mo, and the dogs obediently get in line to follow the leader. Mo also practices trail commands with them. The dogs know how to huddle up and wait. The command “break” means they can start running along the trail again. The whole thing is a wonder to watch.

After the dogs have run around to their hearts’ content, the Thompsons load them back on the bus for the trip home.

“Welcome back to the bus, everybody! How was your hike?” Lee asks in the video. He is answered with happy barking.

The door-to-door dog walking service may sound too good to be true, but it’s been the reality of this young family from Skagway, Alaska, for over two years now. “This is our full-time family business. It’s what pays our bills and keeps the roof over our head and keeps us fed,” said Lee in an interview.

Still, it is a dream job. “I look in the rearview mirror of the bus as I’m driving sometimes. And I see all the dogs back there. And I can’t believe we do this for a living,” Mo said. The passengers can be vocal at times, but they’re generally well behaved.

RELATED: Woman Brings 97 Homeless Dogs Into Her Home During Hurricane – Now She’s Trying to Get Them Permanent Homes

The dogs are living the dream—and their owners know it. Besides getting to spend time in the great outdoors in a pack of their closest friends, the dogs are offered a “complimentary chicken liver treat” during each ride.

Or they’re just irresistibly drawn to the cuteness overload.