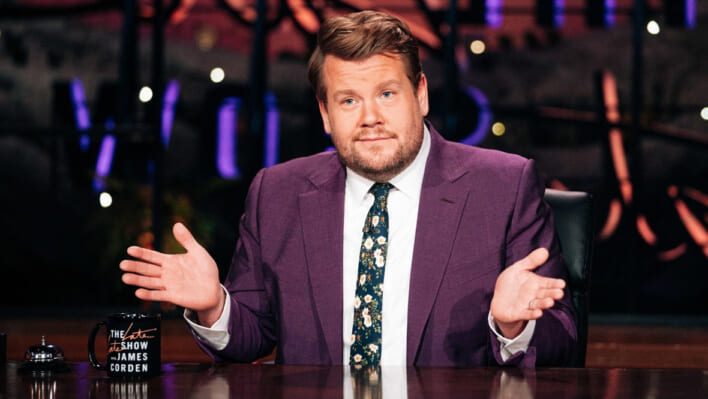 James Corden was recently banned, and then un-banned, from the Manhattan restaurant Balthazar. What led to the incident that had the comedian talking so “much about eggs” and how he “can improve.”
By Bianca Mercuri    October 31, 2022

James Corden was recently banned, and then un-banned, from the Manhattan restaurant Balthazar. What led to the incident that had the comedian talking so “much about eggs” and how he “can improve.”

James Corden, host of the infamous The late Late Show with James Corden is also a comedian and known for the bonds he shares with his plethora of celebrity guests. Carpool Karaoke, spearheaded by Corden himself has gone viral more times than can be counted. It’s featured everyone from Harry Styles to Adele and Lady Gaga. But recently, his friendly persona has been in question as he was publicly banned from a swanky Manhattan restaurant.

RELATED: James Corden Reminds Us That Shame Isn’t the Answer

Celebrities being rude to their servers isn’t a new story, but it’s one that hints at a larger issue of entitlement and blown-up egos in Hollywood. Let’s uncover the full story of what events transpired that got Corden banned and discuss his broadcasted apology.

On October 17 the owner of Balthazar Keith McNally took to Instagram to call James Corden “a tiny Cretin of a man” and “the most abusive customer” to Balthazar since the restaurant opened 25 years ago. He then declared him banned and “86’d” him. Now, this was shocking to many as Corden comes across as a likeable, jovial, and all-around family man. But, the manager’s report from these incidents indicates another side that’s been hidden away.

Far from the reach of cameras, it seems that Corden snapped. According to McNally, the first manager report described Corden finding a hair in his food. While the manager was very apologetic, it seems Corden was “nasty” and said, “Get us another round of drinks this second. And also take care of all of our drinks so far. This way I write any nasty reviews in yelp or anything like that.”

RELATED: A Waitress Is Humiliated by a Rude Customer – But a Mysterious Letter Changes Everything

Another, more recent, incident on October 9 was recorded and reported back to McNally by the manager working that afternoon. Corden and his wife showed up for brunch, ordering an egg yolk omelet and a side salad. Corden claimed that there was some egg white mixed with the egg yolk and requested to have it redone. The kitchen remade the dish but sent it with home fries instead of a salad by mistake. That’s supposedly when Corden erupted, saying “You can’t do your job! You can’t do your job! Maybe I should go into the kitchen and cook the omelette myself.”  Apparently, Corden was pleasant to the manager but very rude to the server.

These two incidents combined are what encouraged McNally to ban the comedian in order to protect his staff from the abusive behavior they were subjected to while serving him. Although, Corden has a slightly different account of what happened.

A week after McNally banned Corden from his Manhattan restaurant, Corden called to apologize for his behavior which McNally accepted. In a follow-up Instagram post, McNally says that he “strongly believes in second chances” and invited Corden back to the restaurant.

Many were wondering if Corden would address the situation on the upcoming The Late Late Show with James Corden. To everyone’s surprise, he did. Although his account of the events differed from McNally’s and paired with some other behavior, made fans question his sincerity.

Before his apology, Corden showed his elderly parents in the audience. While he would usually tell jokes, his family-oriented approach of acknowledging his parents set the mood for what was to come. Corden chalks up his anger toward the egg yolk omelet to the fact that his wife received a dish that contained food she was allergic to. “As her meal came wrong to the table the third time, in the heat of the moment, I made a sarcastic, rude comment about cooking it myself,” he said, “And it is a comment I deeply regret.”

RELATED: Gay Couple Gets Kicked Out Of Restaurant, Manager Has The Best Response

Corden says he understands the difficulties of being a waiter as he was once one himself. He claims to have respect for and value anyone that does this job, and yet from what McNally revealed in the reports this doesn’t seem like the case. He also said, that “the restaurant manager and the server there were lovely, they brought out four glasses of champagne as an apology, but we were like, ‘that’s not necessary, we don’t need it.”

This specifically rubbed fans the wrong way as the report stated that he demanded his drinks for free the first time around and was most likely expecting the same. The graciousness he states at the end that he and his wife had denied the free champagne seems out of character with the incident that occurred including the temper tantrum that he admitted to having.

“Because I didn’t shout or scream or didn’t get up out of my seat, I didn’t call anyone names or use derogatory language, I’ve been walking around thinking that I haven’t done anything wrong,” he said, “but the truth is I have. I made a rude comment, and it was wrong. It was an unnecessary comment. It was ungracious to the server.”

Why Some Celebrities Are Rude to Servers

Corden isn’t the first celebrity to be called out for being rude to a serving staff. Last year on the viral video app TikTok, many servers were coming out with their stories about serving celebrities and gave insight on who was rude and who was not.

One TikTok user said that she was less than impressed with the “Knocked Up” director Judd Apatow and his wife, and well-known actress, Leslie Mann. “I wanted to like them so much, but they were so rude,” User Annie Bond said in her video, “Maybe they were just having a bad day.” This is an important point as many commenters on the video contradicted her review of the couple, saying that they’ve had nothing but positive encounters with them.

RELATED: Candace Cameron Bure’s Reaction to Being Called “the Rudest Celebrity” May Change Your Mind About Her

Everybody has bad days, celebrities included. While we’d like to believe that everyone is perfectly agreeable, positive, and respectful at all times that isn’t always the case. If we self-reflect, we can all find moments when we’ve dished our bad days on others unintentionally. Celebrities aren’t immune to these emotions and it can happen that we catch them on a day when they aren’t feeling the best.

That being said, it’s also important to hold celebrities accountable as they are under public scrutiny and can send a bad message to their fans, especially if those fans are young and impressionable. No one wants to be labeled rude, Corden included. Corden had not one, but two incidents at this one restaurant alone. Were those just bad days, or can it be assumed that Corden has a bad attitude?

Watching how people treat others, whether it’s in the service industry or not, can be a strong indicator of someone’s personality. While Corden used the excuse with The Times UK, “No one ever tells you how to deal with fame” never more has the old adage of ‘treat others how you want to be treated’ rung true.