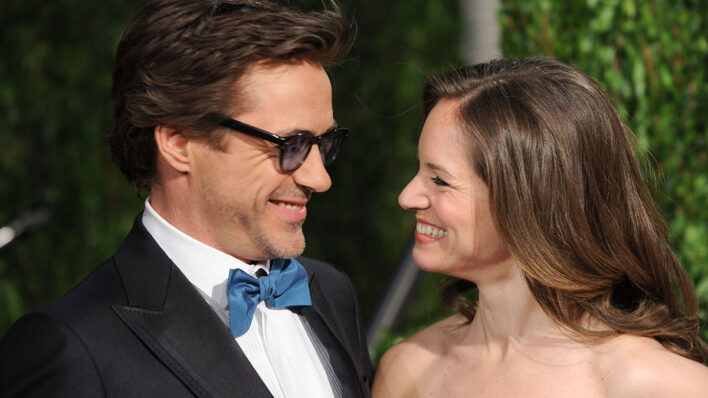 Robert Downey Jr.’s Wife: Why Susan Levin Is Known as the Miracle That Saved RDJ

Robert Downey Jr. was attempting to come back from rock bottom when he met and fell in love with producer Susan Levin.
By Barbara Pavone    August 9, 2022

Robert Downey Jr. was attempting to come back from rock bottom when he met and fell in love with producer Susan Levin.

With 17 years of wedded bliss, Robert Downey Jr. and Susan Levin (now Downey) make up one of Hollywood’s most enviable couples. Their love story isn’t a traditional one, however. Before she was known as “Robert Downey Jr.’s wife,” or the co-founder of Team Downey, the longtime film producer met the actor at one of his lowest points. Robert had just spent close to a year in jail and finished court-ordered rehab for his widely publicized addiction.

Robert could have lost his movie career for good. But then, in 2002, he talked his way into a role in a thriller called Gothika by agreeing to get most of his pay after filming. The experience changed his life, in more ways than one.

Robert Downey Jr. not only met his future wife, but also the person who would turn his entire world upside down — in the best way possible. On Aug. 27, 2005, the couple said “I do” after two years of engagement. In 2012, they had their first child, son Exton Elias Downey, then welcomed daughter Avri Roel Downey in 2014. (Robert also has a son, Indio Falconer Downey, from his marriage to singer Deborah Falconer.)

How Susan Levin & Robert Downey Jr. Worked Through Their Differences

Robert met Susan in 2003, on the set of the supernatural thriller Gothika, her “first full-credit producing job.” (She was co-president of Dark Castle Entertainment, and executive vice president of production of Silver Pictures.) However, it wasn’t love at first sight. Far from it.

Asked In 2009 whether she was immediately attracted to her husband, Susan laughingly admitted to Harper’s Bazaar, “Not even a little bit. The main thing I remember about meeting him was thinking how strange he was.”

“I thought he was a brilliant actor, but it didn’t go beyond that,” she added. “I saw him more like a professor or someone’s older brother.”

Years later, Susan again noted how she initially thought Robert was “interesting but weird.” To illustrate her point, she recalled a dinner with cast and crew during which “everybody else ordered Japanese, but Robert told us how oatmeal was the ‘super-food’. He brought his own packets of oatmeal to have at lunch. And he had this box of various herbs and stuff. And then he started doing these yoga moves.”

But the producer’s feelings began to change a few weeks later, as the pair got to know each other.

Remembering the exact moment when she began to view the actor in a different light, Susan said, “One day [after filming], when we were on the treadmills, Robert goes, ‘Levin, you wanna go to dinner?’ and I said, ‘Eh, I’ll grab something to eat.’ So we agreed to go change and meet in the lobby and as he walked down the stairs toward me, I remember looking up at him and suddenly thinking, ‘He’s really cute.’”

She Believed in “Running Toward What Scares You”

An attraction may have begun to develop, but the actor and the producer couldn’t have been more different.

Luckily, the differences didn’t faze Susan one bit. “I think there’s something about running toward what scares you,” she told Harper’s Bazaar, admitting she chose to follow her heart rather than get hung up reservations about incompatibility.

“More than anything, I never doubted it,” she said. “There was something in my gut that knew really quickly. I knew three months in that this was it.”

Six months later, Robert proposed. However, just because Susan was following her gut didn’t mean she was doing so blindly.

When He Nearly Reverted to His Old Ways, She Wasn’t Having It

“I did meet Darth Vader, for like a minute, right after the movie wrapped,” Susan recalled of Robert’s addiction. “I said immediately, ‘This isn’t gonna work.’ I made it clear that to stay with me, nothing could happen.”

RELATED: How Seth Rogen and Lauren Miller Rogen’s Dedication to Charity Has Enhanced Their 20 Year Relationship

Their love was so strong that it gave Robert the ultimate push he needed to change things for good. In July 2003, he reportedly tossed is remaining drugs into the ocean, and vowed to never touch them again.

Susan credited the power of true love. “I think he saw what we had,” she said. “There was something magical there, something we couldn’t put our finger on.”

Their Relationship Is “Perfectly Symbiotic”

According to Harper’s Bazaar, Susan’s unofficial nickname in Hollywood is “The Miracle That Saved Robert Downey Jr.” The Iron Man star certainly agrees with that assessment. He credits Susan with inspiring him to do better.

“I guess the only way to explain it is that I’ve become more like her,” he revealed.

She Didn’t Just Help Overcome His Demons, She Helped Build a Successful Career

Speaking in 2010 with the Herald, Robert admitted, “The old saying is true — behind every good man there’s an incredible woman. I owe a huge amount — if not all — of my success to Susan. We make a great team.”

Case in point: His love helped Robert to snag some of his most high-profile roles in Hollywood, including that of Tony Star in the Marvel Cinematic Universe. There’s also the lead in Sherlock Holmes, after Susan told director Guy Ritchie that he’d be great for the part. (Susan was a producer on Sherlock Holmes and its 2011 sequel.)

RELATED: Gisele Bündchen’s Feelings on Tom Brady’s Return to Football Reveal the Challenges That Come with a 13-Year Marriage

But it wasn’t a one-way street, by any means. Robert has also had a positive impact on wife Susan.

Before meeting Robert, Susan was “very focused, driven, rigid, work-oriented. I didn’t care about having a family or making a home. I didn’t think about kids. […] And then I had someone who came in as a tornado, this creative, beautiful ball of insane energy and passion. And it completely opened me up.”

They Make Each Other Better

As Susan shared with Harper’s Bazaar, they’re stronger as a unit than they’ve ever been apart.

“He always says that we became this third thing when we got together — something that neither of us could have become by ourselves — and I think that’s true,” she gushed.

Guy Ritchie may have summed it up best, however, when he called their relationship “perfectly symbiotic.” “They each represent the other side of each other’s coin,” he said. “There’s no clashing over the same space, although they’re always looking in the same direction. It’s a very rare thing they have.”

If there’s one thing everyone can learn from Robert and Susan, it’s that a successful relationship requires mutual respect and admiration.

The union cannot be lopsided. Rather, it must be a perfect balance in which both parties feel fulfilled and empowered to be the best possible versions of themselves at all times, both individually and together.