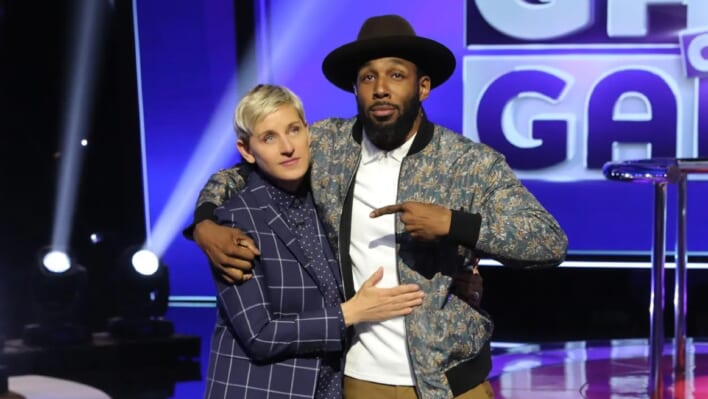 Why We Need to Talk About the Tragic Death of tWitch, The “Ellen” DJ Who Seemingly Had It All

Stephen Boss, best known as ‘tWitch’ tragically passes away at the age of 40. The dancer is a heartbreaking reminder that mental health struggles too often take place under the surface.
By Steven John    December 15, 2022

Stephen Boss, best known as ‘tWitch’ tragically passes away at the age of 40. The dancer is a heartbreaking reminder that mental health struggles too often take place under the surface.

Warning: this article deals with mental health issues and suicide, so if those are sensitive or triggering topics for you, consider passing on the read or proceed knowing what’s coming.

If feel you may be in a crisis state and at risk of self-harm, there are resources available to you right now and you should by all means seek help. The government runs a “Suicide & Crisis Lifeline” that is staffed 24/7 by people who genuinely care for your well-being, and can be reached simply by dialing 988.

It was announced today that Stephen “tWitch” Boss has died from suicide at the young age of 40. Best known for his work on Ellen and So You Think You Can Dance, the dancer was considered a beacon of light and positivity.

If you Google an image of tWitch, in almost every picture you will see a man with a bright and warm smile — in the few where he’s not smiling, it’s usually because he is intensely focused on dancing. If you find videos of tWitch, indeed most of them are of him dancing and doing so with remarkable skill and passion.

RELATED: How Jim Carrey Inspired Ariana Grande to Be Unashamed of Her Mental Health Struggles

In short, when you look at tWitch, you see a man who looks happy — ebullient, even. And with a loving wife, three beloved children, a successful career, and ostensible decades of life ahead of him, why would he not have been happy? Because behind that smile and those warm eyes, Stephen tWitch Boss suffered deeply from mental health issues.

Who was Stephen “tWitch” Boss

tWitch came rocketing to fame on account of his superlative skills as a dancer. He made a name for himself in his mid 20s when competing on the show So You Think You Can Dance where his signature freestyle hip hop dancing caught the attention of judges and viewers alike, as did his radiant positive energy. He would, in later years, serve as a team captain on the show and even became a So You Think You Can Dance judge in the very year of his passing, 2022, per Forbes. It was on this show that he would meet his future wife and the mother of his children, fellow dancer Allison Holker.

A few years after his breakout performance on So You Think You Can Dance, tWitch appeared on the show Dancing with the Stars and, a year after that, in 2014, tWitch was invited to appear on The Ellen DeGeneres Show as a guest DJ. He made quite the positive impression on the host and the audience and viewers, because he was soon a permanent fixture of the show. And in 2020, he became an executive producer on the wildly popular program.

In addition to his many turns dancing on TV, his work as a producer, and his DJing, Stephen Boss was also a teacher, instructing students at the South County Classical Ballet school.

Beyond his work life, tWitch had a rich and fulfilling personal life, as well. As noted, he married dancer Allison Holker. The two most recently celebrated their ninth wedding anniversary. And Boss was a father to three: a 14 year old named Weslie Fowler, a six year old named Maddox Laurel, and a three year old named Zaia.

What happened to Stephen tWitch Boss?

tWitch was alone in his hotel room when he took his own life on December 13th, 2022.

He “had it all,” as they say — the family, the partner, the career — but mental health does not care about these factors. He is not the first celebrity who shocked the world with their death; Anthony Bourdain and Robin Williams seemingly had it all too.

There is no way to allay the sadness of those who knew and loved Stephen Boss, but there may be a way to help others or yourself. We, as friends and family and as a society as a whole, need to talk about mental health more openly so that no one feels they have to suffer alone.

The tragic death of tWitch at just age 40 may help prevent the deaths of others, this kind, passionate man was suffering deeply inside.

Family and Friends Mourn the Loss of their Friend

The outpouring of love and support for tWitch immediately following his passing shows that he was anything but alone, but sadly he did not feel he could get the help he needed. Musician and producer Questlove summed up the feelings of many in a touching Instagram post which read: “I have no words man. May his family find resolution in this dark time. May we all find peace of mind in our everyday lives. Everyday is a winding road & you just may never know who is on the edge. Take time out for yourselves if you feel like you’re on the edge. Take time out for yourselves & sit in silence people. Time literally heals wounds. Rest In Melody Twitch.”

Channing Tatum posted, “”I have no words. There aren’t any. My head or heart can not understand this. There is just so much… i don’t know where to begin. I love you. I’ll see you again my friend. Until then.”

Ellen Degeneres posted Instagram, ““I’m heartbroken. tWitch was pure love and light,” she wrote on Instagram. “He was my family, and I loved him with all my heart. I will miss him. Please send your love and support to Allison and his beautiful children – Weslie, Maddox, and Zaia.”

Stephen tWitch Boss will never read these and other laments over his passing, but you can, and others can, and we can all work toward a place where communication about mental health struggles becomes the norm.

It’s important for all of us to reach out and offer help to any friend, family member, co-worker, or anyone we suspect may be grappling with mental health issues. These struggles can take place below the surface, hidden by a smile.