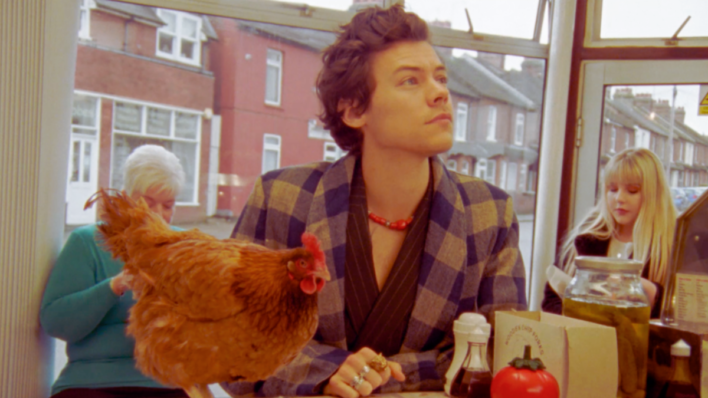 Why the Heck Are Harry Styles’ Fans Throwing Chicken Nuggets at Him?

It is a truth universally acknowledged that singer and actor Harry Styles is a heartthrob. Wherever he winds up, the eclectic superstar encounters tons of praise coming in the form of flowers, screams, and … chicken nuggets?
By Mikaela Lucido    September 7, 2022

It is a truth universally acknowledged that singer and actor Harry Styles is a heartthrob. Wherever he winds up, the eclectic superstar encounters tons of praise coming in the form of flowers, screams, and … chicken nuggets?

Harry Styles has been making a name for himself for years. With three critically acclaimed albums, two upcoming films, and being part of a historic boy band, he’s got a lot of talent to go around. It’s no wonder he has deeply devoted fans, so devoted, in fact, they are not above throwing chicken nuggets at the singer mid-concert.

RELATED: When Billie Eilish’s Tourette Syndrome Was Revealed by Fans, She Took Control of Her Own Story

While performing at Madison Square Garden in late August 2022, Styles took a moment to process the odd situation. Fans urged him to eat the nuggets but Styles only tossed them back into the crowd (he diplomatically reminded the audience of his dietary restrictions).

Weird as Chicken Nugget Launch is, Harry Styles’ fandom is all too familiar with the eccentric. At the Venice Film Festival, the Don’t Worry Darling star sparked a debate on whether he spat on co-star Chris Pine. Still, this debacle gives us another glimpse into the increasingly zany world of parasocial relationships.

Harry Styles’ Relationship With His Fans

Many celebrities opt to avoid social media entirely. The internet can be merciless. It sometimes seems to punish public figures for having private lives in the first place. But social media undeniably connects us, offering a different angle on society’s role models. You could say this perceived intimacy is exactly why Harry Styles’ fans treat him like a friend or therapist.

More often than not, Harry Styles reciprocates with his fans. He makes room for fan proposals during his shows. Styles offers earnest life advice when he can. He laughs in the face of Chicken Nugget Launch, meeting even the most absurd spectacles with the kindness he sings of.

RELATED: Brad & Gwyneth Revealed a Surprise That Gave Their Fans Hope – 20 Years after Breaking Up

This back-and-forth mirrors BTS’ relationship with ARMY, renowned for its symbiotic nature of giving back to charities and building community. Yet like most internet phenomena, the intensity of pop star fandom is double-edged. Recently, Styles spoke out on how toxic fans can be about his relationship with Olivia Wilde.

Styles views Twitter as a “shitstorm of people trying to be awful to people,” likely speaking from experience dating back to his One Direction era. But for the most part, Styles seems able to separate the shitstorm from the healthier corners of his fandom. After all, he’s more than happy to participate in what some would call oversharing culture.

Although many see Harry Styles’ fan interactions in a positive light for their sincerity, others are concerned with the singer’s boundaries or lack thereof. Of course, Styles does approach his personal life with caution. Early in his romances, he establishes the fact his partners will inevitably face scrutiny. It’s awkward but necessary.

But in a world where anything personal can go viral, for better or for worse, is it healthy for Styles to encourage fans to treat him so informally? On one hand, it can be moving when we come across a video of Styles giving an impromptu therapy session to a fan. It feels good, perhaps validating, when someone we’ve projected an image of love onto acknowledges us. On the other, it can set unrealistic expectations for stars to always “be on.”

Truthfully, as The Independent points out, Styles has a lot to gain from being friendly to fans. It’s good press, especially with Don’t Worry Darling and My Policeman on the horizon. Moreover, his openness can be flattering, seen as refreshing and authentic. But we can never really know if Styles does come from a place of authenticity, and even if he is sincere, it might be helpful for him — and us — to reconsider which lines we’re okay with blurring.

How Society Encourages Entitlement and Spectacle

We can’t pin the blame on Harry Styles or fandom. Tom Holland’s break from Instagram reveals no one is safe from the spiral social media can send us into. It’s not just the Harries. Regular people capitalize on documenting their children’s lives on YouTube or TikTok, often without their consent. More and more, our society is shaped by instant gratification and a sense of entitlement.

RELATED: Dwayne “The Rock” Johnson’s Inspirational Message To His Fans

None of us are entitled access to Harry Styles or any celebrity, much less their love lives. Motivations aside, Styles appears to enjoy connecting with fans. But how much intimacy can there be when there is a clear class divide and thousands present to witness your moment with someone who didn’t even know you existed?

Really, there are no clear-cut “solutions” to the Chicken Nugget Launch discourse except for us to stay conscious of the very real factors at play when engaging in parasocial relationships. We can appreciate the spontaneity, humour, and kindness of Chicken Nugget Launch and question our tendency to act entitled to celebrities. After all, much like a chicken nugget, we contain multitudes.