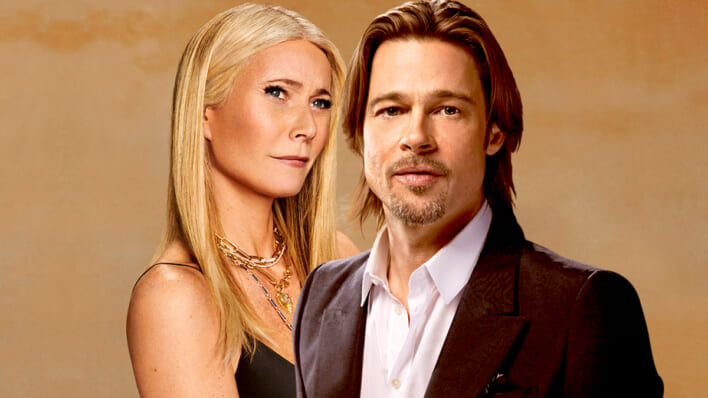 Gwyneth Paltrow and Brad Pitt went from lovers to best friends. What happened in the last two decades to turn their romantic love into lifelong friendship?
By Bianca Mercuri    June 25, 2022

Gwyneth Paltrow and Brad Pitt went from lovers to best friends. What happened in the last two decades to turn their romantic love into lifelong friendship?

Much of Hollywood’s gossip is about relationships. Which co-stars’ on-screen relationships were taken off-screen? Who’s getting back together? One couple, in particular, gained the media’s attention after a long-awaited reunion.

Gwyneth Paltrow and Brad Pitt made headlines in 2022, bringing attention back to their iconic ’90s romance… but not in the way that you think. The two proclaimed their lasting friendship and love, even 20 years later.

Gwyneth Paltrow and Brad Pitt have both had extensive Hollywood careers. Paltrow has actually entered the lifestyle space in recent years with her brand Goop. Goop tackles everything from wellness to beauty, style, home, travel, and even advice from doctors.

Meanwhile, Pitt has focused on himself and his career in recent years. The Fight Club actor has had more blockbuster hits than we can count throughout his decades-long career, including Mr. & Mrs. Smith, Inglourious Basterds, Ocean’s Eleven, and Se7en, which is where he met Paltrow.

Their relationship was adored by the public and their die-hard fans, so much so that their downfall evoked gasps around the globe. But that doesn’t mean they made it onto the list of Hollywood couples who avoid each other on the red carpet.

The two began dating in 1994 after meeting on-set, and quickly became Hollywood’s “it” couple. In 1996, after three years together, the two got engaged, but only months later split. But their break up did not mean that their love suddenly dissipated. Unlike many failed Hollywood relationships, Paltrow and Pitt continue to have love for each other — even 20 years after breaking up.

The A-list actors went on to marry other people after their split — a few times in fact. In 2003, Paltrow married Chris Martin, co-founder and lead vocalist for Coldplay. They had two children, Apple and Moses, but got divorced after 13 years together. In 2018, Paltrow married again, this time to writer and director Brad Falchuck. Paltrow and Falchuck are still married as of 2022 and seem to be very happy.

RELATED: Jennifer Aniston’s Choice To Not Have Children With Brad Pitt Is Not The Reason Their Marriage Failed

Meanwhile, Pitt went on the marry FRIENDS star Jennifer Aniston in 2000, a union that lasted five years before ending in divorce. Pitt was not single for long as he began to see his Mr. & Mrs. Smith costar, Angelina Jolie, that same year.  The two finally got married in 2014, but the marriage dissolved quickly and the two parted ways in 2016. They share six kids together and are still in court to settle the issue of custody.

With all of these relationships gone wrong throughout the years, some of them even ending on not-so-great terms, what made Pitt’s relationship with Paltrow so different? And what brought them back together… in a way?

After years apart, Pitt and Paltrow announced a very different kind of reunion, this time for a new product launch on Goop.

The new launch of God’s True Cashmere on Goop’s website included a candid conversation between the ex-lovers. They looked back at their very public relationship history, as well as Brad Pitt’s bond with Paltrow’s late father, Bruce, a well-known film director and producer. Bruce Paltrow passed away in 2002, leaving the ones who knew and loved him heartbroken, including Brad Pitt.

This Father’s Day edition piece allowed them to reflect on their almost in-laws. “I’ll never forget when we were engaged,” Gwyneth stated, “And he came to me one day, his eyes full of tears, and he said ‘you know, I never realized what they mean when they say you’re gaining a son. Like, I’m gaining a son’.”

Not only did this give us insight into the very real and very powerful relationship the two shared, it also showed that the love between them stretched beyond just themselves and to their families. The feeling between Bruce and Pitt was mutual. “He did have a profound effect on me and is someone I still think about,” Pitt said.

The two agreed that everything happens for a reason, including their split. Paltrow commented, “I finally found the Brad I was supposed to marry. It just took me 20 years,” referring to her current husband Brad Falchuck.

This lighthearted comment shows how far their friendship has come. The ability to reminisce about the love they had without disrespecting her current marriage is very telling about the character of the Se7en stars. Staying friends with your ex is a huge feat, whether you’re a celebrity or not.

We always look for happy endings from our favorite couples, but sometimes that is not in the form of a fairy tale wedding. For Paltrow and Pitt, this happy ending was not a walk down the aisle, but rather a life-long friendship between two people who love each other very much.

The Fury star said it was lovely to have Paltrow as a friend again, “And I do love you,” to which Paltrow responded, “I love you so much”.

What Can We Learn from Brad Pitt and Gwyneth Paltrow’s Friendship?

Many of us are used to seeing Hollywood relationships ending in lawsuits, drama, and ridiculous headlines. What Paltrow and Pitt have taught us through the new Goop launch is that a called-off engagement isn’t necessarily a failed relationship. In fact, their relationship holds as much love as ever even 20 years after breaking off their engagement. This kind of amicability is something to strive for.

Romantic love is a wonderful experience, but it can fade. This doesn’t mean that we should harbor negative feelings or pretend as if the other person no longer exists. When you’re in a committed relationship, you share memories, friends, and sometimes even children. The takeaway from Pitt and Paltrow’s Goop interview is that even when romantic love fades, if respect and care for the other person remain, it is never a failed relationship. Similar to what Bruce Paltrow said about gaining Brad as a son, don’t think of it as losing a lover, but as gaining a friend.

Brad Pitt supports Paltrow fully on this new addition to her already-established brand Goop, but also in all of her endeavors past, present and future. Likewise, Paltrow continues to be a Brad Pitt fan, whether he’s playing a role or just being himself. We loved them as a couple, but we love them even more as great friends!