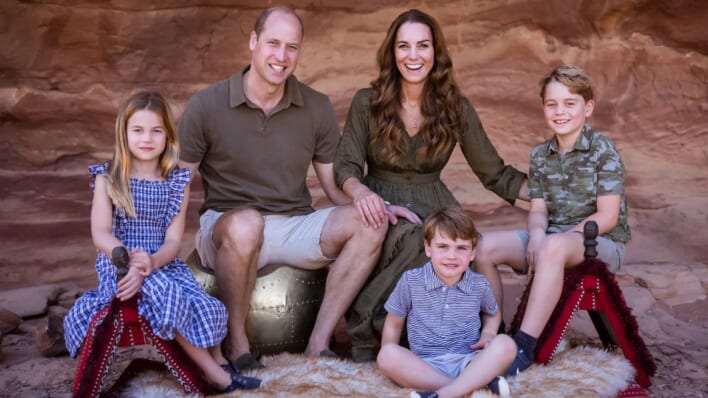 The royal couple has chosen to put their children first and that’s as relatable as it gets.
By Barbara Pavone    August 25, 2022

The royal couple has chosen to put their children first and that’s as relatable as it gets.

Prince William and Kate Middleton have long given us relationship goals while also being inspirational as individuals. Kate, for example, has shown us the power of admitting weakness, and her very real parenting style is seriously refreshing.

Even so, the Duke and Duchess of Cambridge haven’t been immune to the criticism that plagues most of Britain’s royal family. However, the criticism they’ve faced is unique in that it’s often focused on their parenting style. And yet, the way they’ve approached raising three well-balanced children in totally surreal circumstances is actually a lesson in good parenting.

Back in June 2022, Kate Middleton faced major backlash after Prince Louis’ headline-making Platinum Jubilee tantrum. The four-year-old acted like an everyday kid and yet, the haters came out in full force. Many were impressed with Kate who clearly did her best as a normal mom in an abnormal situation.

Now, just a few months later, she’s being criticized again. This time, it’s because she and Prince William have decided to leave London’s Kensington Palace (where they moved in 2017) and settle in the quieter, more private Adelaide Cottage in Windsor Home Park. Their aim? To bring as much normalcy as possible to their kids’ upbringing.

According to the Associated Press, the property is a downsize from their current digs as it only has four bedrooms and no space for live-in staff. Not even their longtime nanny, Maria Borrallo, will be able to move in, which means the siblings will be without a live-in nanny for the first time ever, per The Telegraph.

The move to Adelaide Cottage will also allow for more family time. Not only is it a 10-minute walk from Windsor Castle where Queen Elizabeth has been spending much of her time, but it’s located in the county of Berkshire where Kate grew up and where her parents still live.

However, one of the biggest perks of the move is that Prince George, Princess Charlotte, and Prince Louis will all be able to attend the same school. As of September, the royal trio will attend Lambrook School, which opened in 1860 and is described as “a leading co-educational Prep School for 615 boys and girls aged 3-13, set in 52 acres of beautiful Berkshire countryside.” Fees range from a not-so-extravagant £4,389 (about $5,200) to £6,999 (about $8,200) per term, depending on the grade.

According to one insider who spoke with CNN, the goal is living a down-to-earth lifestyle, as much as is possible. William and Kate reportedly want to be “active parents in a busy school” and “they want to be as normal a family as possible.”

Why Prince William and Kate Middleton Are Facing Backlash

While Prince William and Kate are moving their family to the countryside, they’re not giving up their Kensington Palace apartment, which will remain their official working residence. They’re also keeping Anmer Hall, a 10-bedroom mansion in Norfolk where they initially raised their kids before moving to London in 2017.

The fact that they will maintain three properties has sparked major backlash. BBC royal correspondent Peter Hunt told Independent that “a third home for the Cambridges is a reminder the royals don’t suffer from the cost-of-living crisis and a looming recession in the same way as the rest of us.”

Meanwhile, Graham Smith, chief executive of Republic, a group that wants to replace the monarchy with an elected head of state, slammed, “While ordinary households are struggling with their energy bills and facing crippling inflation, why are we giving yet another home to William and Kate? This is disgraceful.”

On the flip side, supporters pointed out that the kids deserve the type of privacy they had at Anmer Hall, but that the family couldn’t move back to Norfolk because that would impede their royal duties. “It’s something they have thought long and hard about and this is a decision they have not taken lightly,” assured one royal source.

Speaking with The Sun, another insider explained that William and Kate were careful to balance their own needs with the needs of the country. “They were adamant they didn’t want anything too showy or anything that needed renovating or extra security so as not to be a burden on the taxpayer,” they said. What’s more, “they will pay rent from their private account” and, in return, “the three children will enjoy running around and playing in the gardens, which is the kind of life they enjoy so much when at Anmer Hall.”

Joe Little, the managing editor of Majesty magazine, also argued that security costs would actually be lower since all three kids would be going to the same school. On Twitter, the reaction was split between criticism – “Another Mansion at Taxpayers expense” – and support – “At last some reliable royals to support the Queen.”

Prince William and Kate have made it clear that they’re not about to apologize for their parenting style which puts their kids above all else. As People points out, the couple’s hands-on approach is similar to that of Princess Diana’s.  Indeed, they’ve often followed in the late princess’ footsteps by allowing their kids to be kids.

According to People, Kate wants to raise her kiddos the same way she was brought up — with a focus on family. “She desperately wants that normality for her own kids,” an insider told the mag. To achieve that, she reportedly “runs things at home with the kids and the schedules” and, as another source told People, “she is hugely involved in every single part of their day.”

RELATED: Prince Harry Stops and Talks to 6-Year-Old and His Grandmother – What Happens Next Breaks Royal Protocol

It also means George, Charlotte, and Louis are exposed to everyday activities, like going to the supermarket, doing chores (Kate revealed in 2022 that “George’s job at half term [is] moving feed”), and enjoying time with each other. As Prince William revealed in 2021, most mornings start with music chosen by Charlotte or George and plenty of carefree silliness. “It’s a really happy moment where the children just enjoy dancing, messing around, and singing,” he shared.

While William and Kate have faced plenty of criticism over their parenting choices, it’s obvious they’re simply doing what they think is best for their children (just like all parents do), all while dealing with immense, unnatural pressure.

According to Supernanny Jo Frost, they’re getting it totally right. William has often been praised for his active listening in which he kneels down to speak to his children and thus, by being at eye level with them, lets them know they’re being heard. As for Kate, she’s been praised by Frost for being a “confident parent who is able to hold boundaries whilst empathetically meeting her children’s needs as well as understanding the circumstances.”

Whether or not you like the royal family, it’s impossible to deny that Prince William and Kate Middleton have always chosen to put their children first — regardless of what others might say – and that’s as relatable as it gets.

While there is no perfect parenting style, putting children above all else, is something that most parents have to struggle with.