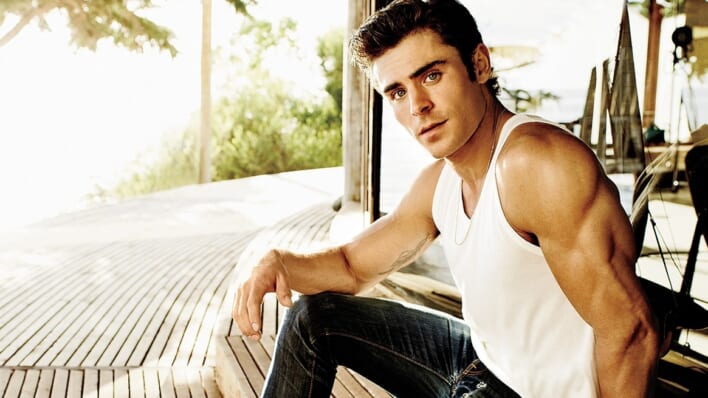 Zac Efron is famous for his good looks and ‘Baywatch’ body. But, when he was questioned about getting plastic surgery after a 2021 clip was released, it brought up a greater issue that affected his physical and mental health. What injury caused Efron’s disfigured jaw, and what do the details of his intense training schedule look like?
By Bianca Mercuri    September 13, 2022

Zac Efron is famous for his good looks and ‘Baywatch’ body. But, when he was questioned about getting plastic surgery after a 2021 clip was released, it brought up a greater issue that affected his physical and mental health. What injury caused Efron’s disfigured jaw, and what do the details of his intense training schedule look like?

Zac Efron is Hollywood’s designated pretty boy. While he’s been in his fair amount of popular films, proving his talent, he’s also very well known in the industry for his charming features and solid six-pack. In 2017’s Baywatch, we got an in-depth view of his physique and haven’t looked away since. We’re definitely watching for the plot – the plot just happens to be Efron’s killer abs.

RELATED: What Happened To Zac Efron? The Hunk Who Suffered Behind Closed Doors

In April 2021, Efron was featured in a clip promoting Bill Nye’s Earth Day Special and it brought even more attention to his rugged good looks – although this time, it was with speculation that he had plastic surgery. But according to his 2022 Men’s Health feature, it wasn’t surgery at all but rather the aftermath of a serious jaw injury. How does this address the even bigger issue of dangerous body ideals in Hollywood?

Zac Efron Didn’t Get Plastic Surgery – He Was Injured!

Efron’s exaggerated jawline and slightly altered appearance were actually due to him shattering his jaw. Unlike most of his other injuries, he’s endured in the past, including a torn ACL, broken wrist, and dislocated shoulder, this one wasn’t training related. Incredibly enough, the trauma came from Efron running through his house in socks. After he slipped and fell, smacking his chin against the granite corner of a fountain, he lost consciousness. When Efron woke up, his chin bone was hanging off his face, a horrific image, and an even more terrifying experience.

How did this incident cause the disfiguration that we saw in the 2021 Earth Day Special clip? Efron explains that the muscles we use for chewing, the masseter muscles, were damaged in the accident which caused the other muscles inside of his face to compensate. “The masseters just grew,” he told Men’s Health, “They just got really, really big.” To mitigate the inflammation, Efron now works with a physical therapist.

The Greatest Beer Run Ever star didn’t know about the plastic surgery rumors until his mom called and asked him candidly if he had. Efron is notorious for his lack of social media presence, and much of that comes from his disinterest in what people have to say about him. After his experience recovering post-Baywatch body, Efron is more focused on how he feels than how he looks.

Efron may not have had plastic surgery, but he’s gone through a lot to alter his body for a role. In fact, he opened up about his training to achieve his Baywatch body and the details were slightly disturbing.

“That Baywatch look, I don’t know if that’s really attainable.” Efron said, “it looks CGI’d. And that required Lasix, powerful diuretics to achieve.” It’s not simply the active ways in which he was achieving this body, but rather the lasting effects and destructive process of what he was doing. What Efron was doing to his body was affecting much more than his physical health, but it called his mental health into question as well.

“I started to develop insomnia and I fell into a pretty bad depression, for a long time,” He admitted, “Something about that experience burned me out. I had a really hard time recentering. Ultimately they chalked it up to taking way too many diuretics for way too long, and it messed something up.”

This need that Efron felt to push himself to the extreme stems from the archetype of beauty in Hollywood which aren’t exclusive to women. Men also have body ideals that are forced upon them, which many celebrities feel pressured to succumb to.

While lean and slender frames such as Timothée Chalamet are romanticized, it’s still viewed as more feminine in Hollywood, and not manly enough to land a muscle-forward role. It’s the men that are bulked up for the latest Marvel movie who are sexualized to an extreme. Robert Pattinson stood up against these insane training routines during his filming of The Batman. In a 2020 GQ interview, the Twilight actor said that “if you’re working out all the time, you’re a part of the problem. You set a precedent.”

Will Poulter, Guardians of the Galaxy Vol. 3 actor also spoke with The Independent about how unrealistic and dangerous it can be to try to look like the superheroes on our screens. His refreshing advice is what we need to focus on moving forward to combat these devastating body ideals. “The most important thing,” Poulter said, “is that your mental and physical health has to be number one, and the aesthetic goals have to be secondary.”

Women are not the only ones affected by body shaming in Hollywood. Fortunately, Efron could escape these harrowing body standards by looking inward and self-reflecting. “At one point, that as a dream of mine – What it would be like to not have to be in shape all the time,” Efron said, “What if I just say, ‘Fuck it’ and let myself go? So I tried it, and I was successful. And for all the reasons I thought it would be incredible, I was just miserable. My body would not feel healthy; I just didn’t feel alive.”

Realizing that both physical and mental health should take priority is the first step to combatting these ideals that are rooted in society’s superficial perspective of celebrities. Efron realized that his love for fitness shouldn’t be sacrificed because of his fear of taking it too far as he did with his Baywatch training. Letting himself go was not the answer, but it was prioritizing his health over his physique and letting that dictate his training. He achieved mindful training which means that he was working out for himself rather than for others, and that’s extremely powerful.

The most dangerous part of living in a spotlight is constantly being aware of what others think of you. As much as we’d like to be unbothered by the opinions and criticisms of the public, it’s extremely hard to do so, and takes years of practicing self-love and building self-esteem. Efron has had years to do this, coming into fame at only 17 years old with the High School Musical films.

“If I valued what other people thought of me to the extent that they may think I do,” Efron said, “I definitely wouldn’t be able to do this work.”