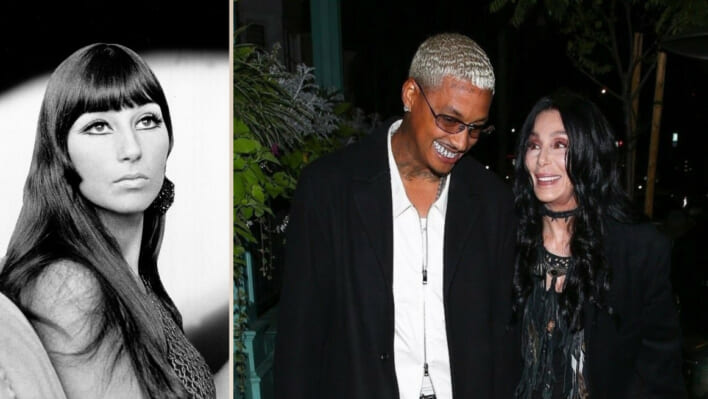 Ever since the flamboyant singer Cher and Alexander “AE” Edwards confirmed their relationship, people can’t stop talking about the age gap between them. So what was Cher’s response to all the fuss?
By Flavia Medrut    December 27, 2022

Ever since the flamboyant singer Cher and Alexander “AE” Edwards confirmed their relationship, people can’t stop talking about the age gap between them. So what was Cher’s response to all the fuss?

Just a few months ago the legendary singer, now 76, shared a picture of her new boyfriend who is 36 years old, captioning it “Alexander♥”. Fans weren’t really sure if Cher was involved in a relationship with the man in the picture so they began asking her if he’s her new beau. Cher simply responded with a smiling hearts emoji.

RELATED: The Secret Behind John Mulaney & Olivia Munn’s Relationship – And How They Make It Work

However, people began raising their eyebrows regarding the 40-year age difference between the two and the iconic star received harsh online criticism. The performer chose to remain calm and replied with comments such as “We’re grown-ups” and “We love each other”.

In another tweet, Cher wrote: “On paper This Looks Strange (Even 2 ME) A.E Says [love] Doesn’t Know Math”.

But it looks like the two now may be engaged! But who is the young man who stirred so much controversy and how did he meet the beloved diva?

Are Cher and Alexander Edwards Engaged?

On Christmas Day, Cher posted a picture to Twitter of a giant diamond ring (fit for the star) with the words, “THERE R NO WORDS, ALEXANDER, A.E.” leaving fans questioning a possible engagement with 36-year-old Alexander Edwards.

The two have yet to confirm the engagement.

Cher has been married twice before to Sonny Bono (1964-1975)and Greg Allman (1975-1979) and if it all works out, it would be her third marriage. Perhaps for the beloved actress and singer, third time is a charm?

Who Is Alexander Edwards?

Alexander Edwards is no stranger to the spotlight. Right now he is a music executive at Universal Music Group — a major record label. Some of the most famous singers on its roster include: Billie Eilish, Ariana Grande and Post Malone.

Edwards is also a music producer and a rapper who has worked with Tyga and Deezy to support their independent music label called Last Kings Records.

When it comes to his personal life, Edwards is well known for dating Amber Rose for three years. The two started their relationship in 2018 and welcomed a child together in October 2019. Alexander and Amber split in 2021 after the actress accused him of cheating on her with no less than 12 women.

How Cher and Alexander Edwards Met

The “Strong Enough” singer said that she met AE for the first time during this year’s Paris Fashion Week. The two didn’t take any pictures together at the time, but the singer posed for photos with Edwards’ friend – Tyga.

Ever since then, more photos of the trio have been captured while they were strolling the town together. And in early November, Cher and AE were photographed outside Los Angeles, holding hands.

Cher Slaps Back At Criticism for Dating a Younger Man

Fortunately, most of the responses regarding Cher’s new relationship were positive. But some people took the low road while voicing their “concerns” over the matter. To these, Cher has elegantly replied with : ”I’m not defending us. Haters are gonna hate… Doesn’t matter that we’re happy and not bothering anyone.” And this is a perfect way to let others know that one will continue to do whatever makes one happy, regardless of someone else’s opinion.

One user voiced their concern over the fact that AE might be involved in this romance only for fame, and will eventually end up hurting Cher. To this, the “Believe” singer replied: “As we All Know …I WASN’T BORN YESTERDAY,& What I Know For Sure…There Are No Guarantees. Anytime you make a Choice You Take a Chance.I’ve Always Taken Chances…It’s WHO I Am.”

As for their 40-year age gap, Cher doesn’t see the problem as “love doesn’t know math”. Besides, she said that Alexander treats her like a queen and he has already met her entire family.

The Double Standards In Relationships

Over the last decade monumental changes have been made toward accepting and celebrating relationships in all their different shapes and forms. Gay marriage became legal in some states, there’s more representation of LGBTQ couples in the media, and nowadays dating apps offer options for everyone. However, although it’s a growing trend, we still seem to have a problem with older women dating younger men.

When a man dates a much younger woman, people are either indifferent to the matter or shake the guy’s hand in appreciation. For example, think about Michael Douglas and Catherine Zeta-Jones. Everyone was congratulating Douglas for dating such a gorgeous and talented woman. Now think about Demi Moore and Ashton Kutcher… Everyone branded Moore a “cougar”.

RELATED: Florence Pugh and Zach Braff Secretly Broke Up – The Reason Why Is Deeply Concerning

We can’t seem to get rid of this relationship double standard, even if the trend of women dating younger men is becoming more and more popular. Plus, the saddest part of all this is that women are particularly quick to judge those who choose to have relationships with younger guys.

But isn’t age just a number? Shouldn’t we be allowed to love and date whomever we want?

There are no guarantees in relationships, regardless of age, sex or other criteria we might consider when choosing a partner. So while others may take offence, we might as well live in the present and do what makes us happy — just like Cher.