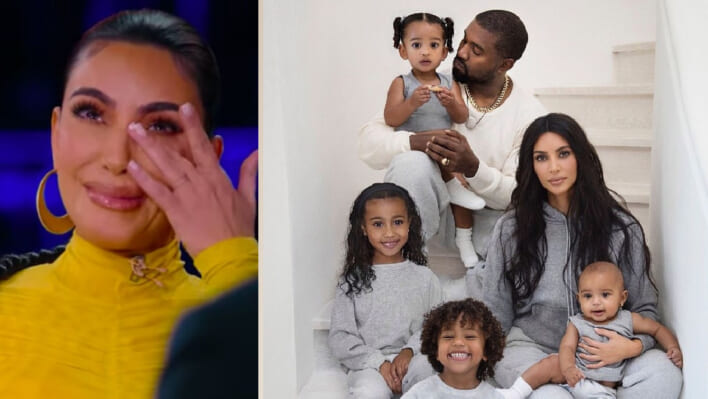 Kim Kardashian gets vulnerable about co-parenting and how she’s protecting her young ones from the storm.
By Shaoni Das    January 3, 2023

Kim Kardashian gets vulnerable about co-parenting and how she’s protecting her young ones from the storm.

Kim Kardashian is laying bare the ups and downs of co-parenting.

Though Kanye West’s controversies have always dominated the headlines, they undoubtedly escalated over the past year, leaving in their wake a series of devastating, irrevocable ramifications for the entire family. One can argue that Kim had always known the risk of tying herself to Kanye and his transgressive actions, but their four children —North, Saint, Chicago, and Psalm — were never given the same choice.

RELATED: The Truth Behind Drake And Sophie Brussaux’s Co-Parenting Will Change The Way You Look At Them

As the mother of the brood, do you isolate your young ones from the storm, or do you ask them to plunge into the eye? That’s the decision Kim has been contemplating as of late, and though she hasn’t quite figured out the answers, she knows what she wants, and she’ll not make any excuses for anyone. Her struggles behind closed doors not only demonstrate the dangerous cycles of actions and consequences but the darker side of co-parenting.

How Kim Is Protecting Her Kids From Kanye’s Controversies

Co-parenting can be one of the most challenging experiences a person can go through, as exemplified by Kim Kardashian’s recent comments about her co-parenting journey with ex-husband Kanye West. In a recent interview on the Angie Martinez IRL podcast, the 42-year-old opened up about the difficulties of co-parenting, saying, “co-parenting is really f—ing hard.” It’s not uncommon for co-parenting to be a difficult process, as it requires parents to put aside any personal issues and work together for the benefit of their children.

Yet her situation is unique nonetheless. Not everyone’s father is a global celebrity with a billion-dollar empire and a vast legion of diehard supporters and critics. Moreover, Ye’s recent scandals have involved anti-semitism, bullying and harassment, and hate speech — how could you possibly begin to explain these concepts to your young children, who won’t be able to make heads or tails of these circumstances? As per Kim, she’s doing her best to shield them from the commotion, vowing to protect them until the end of time. “If they don’t know things that are being said, why would I ever bring that energy to them?” she said.

How Kim Puts Their Kids First

The SKIMS founder added that it’s imperative to keep the children out of any adult issues or conflicts, as they are not equipped to deal with heavy, grown-up problems. Children deserve to have a happy, stable home life, and one day, they might thank her for not “bashing” their dad when everyone called her to do so.

It’s also important to note that Kim is not just protecting her children from negative energy, but also protecting her ex-husband in the eyes of their children. “I definitely protected him,” she stated in the interview, “and I still will in the eyes of my kids,” The mother-of-four recognizes that her children love and care for their father, and wants to maintain a positive relationship between them.

Kim’s decision shows a level of maturity and understanding that can be difficult to achieve in co-parenting arrangements, especially when one party has already wreaked so much havoc. Revealing her vulnerable side, she mentioned that she’s hanging on by a thread, so careful in her approach that one wrong step could dismantle her whole household.

The little ones might very well stumble upon something on social media in the future, but Kim feels it’s her duty to facilitate the most peaceful, stable environment possible for their upbringing. So yes, if they want to listen to Kanye’s music in the car, she’ll “smile” and “blast his music and sing along” while acting like “nothing’s wrong.”

Why She Chose To Take The High Road

Kim and Kanye finalized their divorced in November 2022, with reports claiming Ye is to pay his ex-wife $200,000 per month as child support. Otherwise, they share joint custody of their children and are to “consult with one another on all major decisions relating to the minor children’s health, education, and welfare.”

So why is Kim choosing to take the high road? One might think it shouldn’t be too hard to denounce your ex-husband for his objectionable antics and then systematically eliminate his influence from her children’s lives. However, when reflecting on her childhood, she remembered the special bond she had with her own dad, Robert Kardashian, and realized that she wanted her kids to have the same positive experience. She said, “I had the best dad. I have the best memories and the greatest experience. And that’s all I want for my kids. As long as they can have that, that’s what I would want for them.”

Outside of how she is maneuvering the Kanye state of affairs, Kim’s commitment to her children’s well-being and happiness is evident in the measures she takes to keep their lives as normal as possible. For example, she stays informed about what’s going on in their lives by knowing who their teachers are and keeping track of what they’re talking about at school. She also monitors their access to social media and screens the content they’re exposed to on TV.

What Does The Future Hold For The Kardashian Brood?

At the same time, Kim is aware that each of her four kids will have questions in the future, and when those moments surface, she’s happy to take the time to sit them down and address them gently. “When they are [ready], we’ll have those conversations,” she said. “And I’ll be so prepared. But until then, I’ll do anything to, like, keep their life as normal as possible.”

Of course, co-parenting is not always easy, and it can be incredibly challenging when there are strong emotions involved. But with effort and communication, it is possible to make it work. It’s also important to recognize that co-parenting is a process, and it may take time to find a rhythm that works for everyone.

Kardashian’s approach of protecting her children from outside drama and focusing on their well-being is an excellent example of how to prioritize the needs of the kids in a co-parenting setup. Ultimately, co-parenting aims to create a positive environment for the children, and with patience and understanding, it is possible to achieve that.