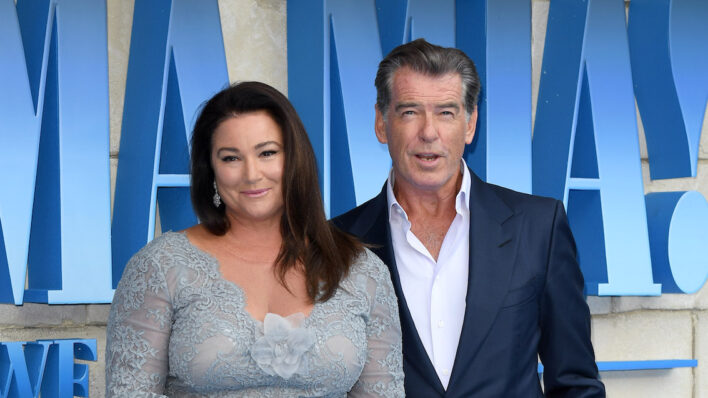 Famous for playing the notorious womanizer James Bond, Pierce Brosnan’s real-life relationship is nothing like his onscreen character. In fact, he has been with the same woman for 26 years and counting. This is the secret to their long-lasting romance.
By Natalie Mossayebi    April 20, 2020

Famous for playing the notorious womanizer James Bond, Pierce Brosnan’s real-life relationship is nothing like his onscreen character. In fact, he has been with the same woman for 26 years and counting. This is the secret to their long-lasting romance.

But it seems that despite being a Hollywood heartthrob and playing the notorious ladies man James Bond for more than a decade, Pierce Brosnan and his wife Keely Shaye Smith are still very much in love. In fact, looking at any picture of them together and hearing them speak in interviews it looks like they are more in love than ever before.

With U.S divorce rates climbing up to a whopping 45% in 2019, I was eager to know what Pierce and Keely’s secret was for living happily ever after.

After losing his first wife to cancer in 1991, Pierce never thought he would find love again. Until, of course, he met Keely three years later at a beach party in Mexico.

He was captivating. Tall, dark and handsome, everything that everybody would immediately be attracted to. He had this mischievous sparkle in his eyes. I thought, ‘Wow! Wow!’

They had their first date a few days later where they chatted until the early hours of the morning. Pierce told People magazine that he couldn’t get enough of Keely when they first got together.

Wherever I went in the world I missed her, and I’d send her tickets to come so we could be together. We just seemed to fit.

He went on to say, “I found a great woman in Keely Shaye. Not if I searched a million times over would I find one as good.” They tied the knot in 2001 and went on to have two handsome sons, Dylan and Paris.

Keely was the ‘strength’ that helped Pierce through his depression:

Pierce was still grieving for his wife when he met Keely. His wife’s death had left him devastated, which he admits to finding very challenging if it were not for the love and support of his “compassionate wife”, who encouraged him to mourn.

Years later his daughter Charlotte died of the same fate – ovarian cancer. Friends of the couple say that it was Keely’s ability to provide emotional support for her husband that has helped Pierce get through his bouts of depression. He says, “she has this strength that I wouldn’t be able to live without.”

What a wonderful example of unconditional love this is. Yes, Pierce is rich, charming, devilishly handsome and not to mention ridiculously talented, but he’s human like the rest of us. Struggling with past trauma, heartache, and loss. And what a woman he has found who loves, supports and encourages him throughout every part of his life.

Pierce once described Keely as, “my North Star, always looking out for me.”

It’s refreshing to see in the world of showbiz this smitten couple publicly expressing their adoration for one another – an inspiration to other couples around the world. Cynics may think it’s just a PR ploy but friends disagree:

“They really are deeply devoted to each other. They’re true soulmates.”

The couple are regularly seen holding hands or kissing every chance they get. It’s clear this Hollywood pair love to spend time together.

While their lives may be pretty busy due to Pierce’s filming schedule, Keely’s writing career and their parental responsibilities, they always make time for one another. Pierce tells People the secret to their happy union is quality time.

“My wife and I took a short road trip to Santa Barbara. We were going for a romantic weekend and to look at houses and drink great wine. We didn’t listen to any music but we just listened to each other’s voices and sorted out the world.”

With all the money and fame anyone could ever ask for, Pierce and Keely want nothing more than to spend good quality one-on-one time with each other.

Keely is secure about his on-screen romances

On top of seeing him through his dark times and not being afraid to publicly show affection for her husband, it seems that Keely is also very “cool” about her husband’s on-screen romances. She funnily describes them as “legal cheating”.

It can’t be easy watching your love fool around with other beautiful women on screen, but Pierce says that this doesn’t bother his wife:

Keely even sounds like she enjoys her husband’s appreciation of other women and tells People magazine, “I understand why women find him sexy because he is an appealing man… he really likes and appreciates women.”

How amazing to be so secure, not just in your relationship but in yourself, that you can be truly happy for your partner and appreciate their appreciation in whatever they’re doing and whoever they’re doing it with. What a woman!

In a brief youtube clip where a photographer asked Pierce what his advice was for a great relationship, he said, “just love each other, love each other every day.”

Could it really be that simple? To just love each other?

We know, it’s easier said than done, especially during these testing times right now when time is all that there seems to be.

But think about how you can introduce more quality time into your relationship. Even if it’s going for a drive somewhere, sharing a bottle of wine together, listening to your favorite tunes, reminiscing about your favorite memories. Find something fun to do together, just the two of you.

It can be easy to lose sight of the deep connection and friendship that once existed at the beginning of your relationship. Life can, well, get in the way!

If you feel that your relationship has lost its ‘spark’, use this time in self-isolation to do something you and your partner have never done before. Have more fun in your relationship and start bringing that dying flame back to life!