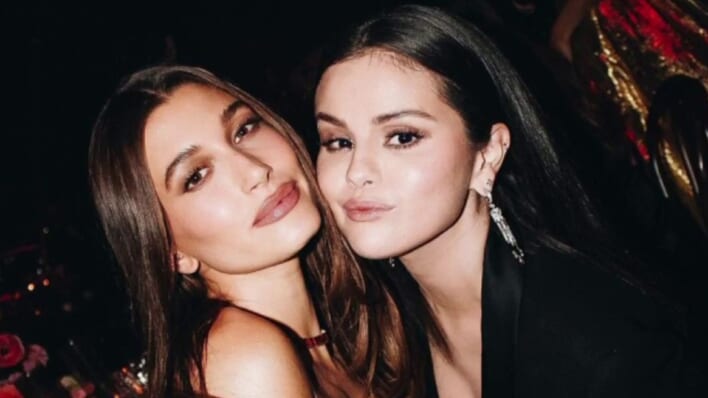 The first pictures of Selena Gomez and Hailey Bieber posing together at the 2022 Academy Museum Gala.

Selena Gomez and Hailey Baldwin Bieber finally put the metaphorical guns down for a cozy photo together. After years of perceived online tension between the two, this photo mends a bridge in their fans’ eyes.
By Bianca Mercuri    October 20, 2022

Selena Gomez and Hailey Baldwin Bieber finally put the metaphorical guns down for a cozy photo together. After years of perceived online tension between the two, this photo mends a bridge in their fans’ eyes.

The Selena Gomez and Hailey Baldwin Bieber drama has been a point of contention online for quite a number of years now. But, the month of October has shed some light on the current situation between the two talented women – and not in the way you’d expect!

RELATED: The Life Changing Realizations Justin Bieber and Hailey Bieber Made In Their Marriage

Gomez and Baldwin both dated Justin Bieber although while Gomez and Bieber broke up, Baldwin went on to become his wife. The two relationships have many loyal fans which created some toxicity online for the two women caught in the middle of it all. So, let’s talk about the recent development in their friendship and why it might just heal the internet.

Baldwin is a model and business owner, married to an award-winning music artist Justin Bieber. She’s recently launched a skincare line that’s taken the internet by storm called Rhode Skin. But this young entrepreneur is not just famous for her business endeavors. Her rumored ongoing feud with Selena Gomez has been perpetuated by online hate and disrespect from fans and eventually gained attention from tabloids.

Baldwin used the podcast Call Her Daddy to address the rumors as well as the situation as a whole- and she did not hold back. Firstly, she addressed the rumor that she “stole” Bieber away from Gomez. Putting the rhetoric to rest, she responded, “I can say, period, point blank, I was never with him when he was in a relationship with anybody – that’s just the end of it.”

RELATED: What Justin and Hailey Bieber’s Unconventional Relationship Teaches Us About Love

“What I will say is that she has been in this industry much longer than I have and maybe there’s something that she knows about like it wouldn’t fix anything,” she said in regard to the hate she was receiving from Gomez’s fans, “She doesn’t owe me anything. Neither of us owe anybody anything except respect. I respect her, a lot.”

Although she did tell host Alex Cooper about how no one spoke out against her haters in the very beginning, including Gomez and Bieber, she also clarified that there’s no more drama between the two women! Baldwin confirmed that she and the “Lose You to Love Me” singer are on good terms, saying that “It’s all respect, it’s all love.”

The Rhode Skin founder did say that she and Gomez have spoken since the wedding without revealing the details of that conversation. “There’s no drama, personally,” Baldwin said, “That’s also why I feel like, well, if everybody on our side knows what happened and we’re good and we could walk away from it with clarity and respect, then that’s fine.”

On October 15, 2022, history was made, and a feud was put to rest. After years of being at odds, Gomez and Baldwin posed for cozy photos taken at the 2022 Academy Museum Gala. The takeaway from this photo was that the two women were never the enemies that the internet made them out to be. In fact, these two women are showing that despite having a past that might be uncomfortable in ways, being kind and cordial goes a long way.

These photos also made us question just how deeply we looked into situations that may have been exacerbated by fans who were on the defense. If we analyze past behaviors from the two, the engagement in the drama never came from their end. In fact, Gomez had gone on record many times to tell everyone to be respectful and kind online. Even though she never directly named Baldwin, most likely to avoid being connected further to this drama, it’s clear that she was speaking about that situation. In turn, Baldwin also never spoke ill of the Only Murders in the Building actress. The photo was meant to heal wounds and erase years of pointless tensions. So, how did we get here?

How the Internet Fuelled the Hate

The internet can be a wonderful place to make connections, spread positivity and kindness, and participate in fun activities and business ventures. But it can also be a place full of hate and negativity if we let it. We’ve seen both sides of the internet, but I don’t think we’ve ever acknowledged how damaging the latter can be.

The situation with Baldwin and Gomez is a firsthand account of what can come about from a desire to be nasty online. Fans from either side misconstrued a situation from an outward look at celebrities’ personal lives. Their perspectives spiraled into defensive attacks from others online and so the feud was created. It was created beyond the knowledge or participation of the actual parties at the center of the scandal.

RELATED: How Selena Gomez Purged All Toxicity From Her Life To Become Her Better Self

Both women have preached women empowerment time and time again, but their cries were ignored and instead overpowered by a desire for drama. Letting go of the past is hard for everyone, especially when It comes down to a relationship. Gomez and Baldwin haven’t had the luxury of having their past stay in the past and this photo was an attempt to mend burned bridges in order to hopefully do so after all this time.

These two women are the perfect example of not living up to rumors and worrying about what strangers think.

There was never a hatchet to bury and the two went out of their way in a simple friendly photo to show that they were above gossip. If they have let this kind of mindless chatter go, then so can we, in our own lives.