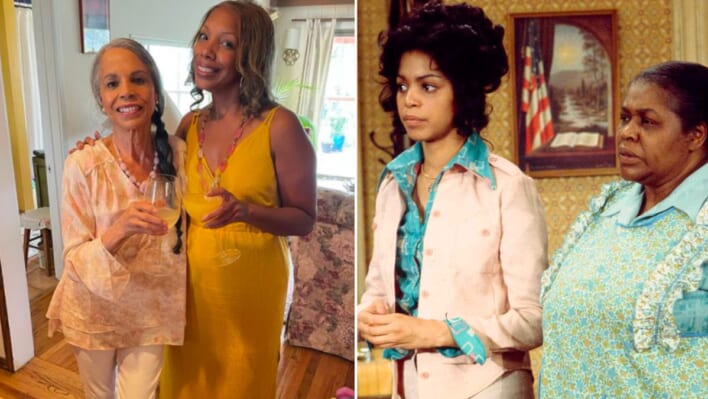 A heartwarming story quite literally fit for a Hollywood movie.
By Ty Jay    November 12, 2022

A heartwarming story quite literally fit for a Hollywood movie.

Mothers watch their daughters grow up. It doesn’t often work the other way around, especially not through the TV.

That was the strange case for Los Angeles’ Lisa Wright, who met her mother after being apart for more than 50 years.

And she realized she had already seen her mother — on a TV show that she would frequently watch as a child.

Wright was reunited with her mother Lynne Moody after doing a genetic test but the rollercoaster to get there was a wild one.

While detailing her unbelievable story, Wright admits she always knew she was adopted but never took the necessary steps to find her biological mother, who had given birth to her when she was 18 years old.

Wright recalled her adoptive mom would tell her, “your mommy loved you, but she was really young, and she knew she couldn’t take care of you. I wanted the baby so bad, and that’s why your mom let me take care of you. You weren’t abandoned. This was just the best thing for you.”

Her adoption was closed, meaning the records were sealed. Her adoptive family and her biological parents did not know each other.

RELATED: Single Mom Finds Out Her Son Can’t Go for ”Donuts With Dad” Day – Decides to Dress Up and Attend as ”Dad” Instead

After having a child of her own, Wright was urged by her son to take a DNA test to find out her genetic heritage — at 54 years old.

After getting the results back, she was given a match. She got an alert telling her who her uncle was so she “just reached out and said, ‘if you’re open to it, I would love to chat.'”

That chat turned out to be something, ironically, right out of Hollywood.

“We’ve All Been Looking For You”

A few days later, Wright spoke to her biological uncle and told him she was born in December 1964 and was told her biological mother was very young when she gave birth to Wright and moved to Los Angeles to pursue an acting career.

Wright recalls her uncle stopped the phone conversation immediately and admitted, “we’ve all been looking for you.”

He said that Wright’s mom lived in Los Angeles and shared her name with his niece. Wright recalls she searched her mother’s name online and found a photo of her. “I just couldn’t believe it,” she said. “For the first time ever, other than my son, I’m looking at somebody who looks like me.”

What’s crazier, Wright says the phone rang a few minutes later and it was Lynne Moody — her mother. Flabergasted, Wright heard, “Is this my daughter?” before asking, “Oh my God, are you mother?” She said hearing her mom say, “yes sweetie,” was the most indescribable feeling she’d ever felt.

The two wasted no time reconciling. They met the very next day. Moody admitted she never had any other children and always dreamed of reuniting with her daughter, more than five decades later, it came true.

“When she was born, they covered my face, my eyes, so that I couldn’t see her,” Moody recalled. “But I could hear her cry. All I could say was ‘I’m sorry, I’m sorry, baby, I’m sorry.'” Moody claimed as a mother, she never forgot that feeling.

She admitted that over the course of over 50 years, she tried to “live with it,” but was constantly wondering if her daughter was hungry, happy, or adopted.

Her Daughter, a Fan

But the oddities don’t stop there. There’s one last kink that makes the reunion fit for a Hollywood movie.

Wright learned that Moody had starred in a sitcom ironically called, “That’s My Mama,” which aired on ABC in the mid-1970s.

Of course, Wright grew up watching the show. So, technically, she grew up with her mother in a distant way.

“We all sat down and watched ‘That’s My Mama’ every week,” said Wright. “And who knew?… And that’s my mama!”

Moody said that life is full of beautiful surprises and wants to remind the public to “be open to miracles, surprises, and keep the faith.”