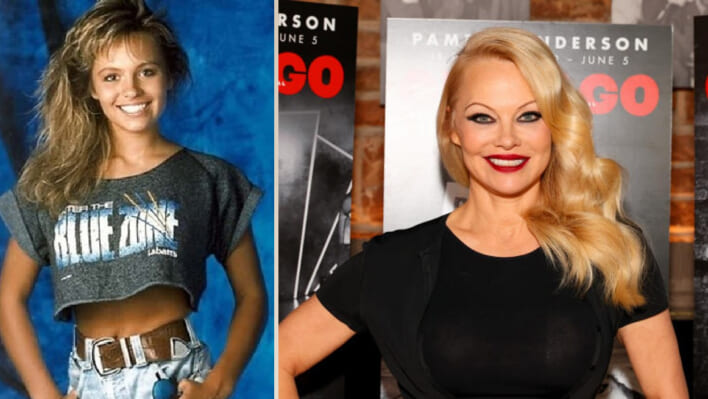 Despite her many accomplishments, Pamela Anderson faced harsh challenges throughout her life and career. What we don’t know about the icon.
By Flavia Medrut    January 18, 2023

Despite her many accomplishments, Pamela Anderson faced harsh challenges throughout her life and career. What we don’t know about the icon.

Pamela Anderson is a talented actress, model, and activist. You’d think that she has it all, but things didn’t come to her as easily as one may think.

Anderson rose to fame as an actress on Baywatch and Home Improvement, and currently holds the record for most appearances on the cover of Playboy magazine (13 covers, to be precise).

RELATED: Why We Need to Talk About the Tragic Death of tWitch, The “Ellen” DJ Who Seemingly Had It All

Today, Anderson is dedicated to philanthropic work and runs her own foundation, supporting organizations that protect human, animal, and environmental rights. She is also the proud mother of two young men

For many years, Anderson has been very successful in her career, but for some, success comes at a price. The actress faced harsh difficulties throughout her life, ever since her early days as a budding starlet growing up in Vancouver, Canada.

Many know her for her tumultuous relationships and many think of her only as a sex-symbol. But Anderson has proved to be more than that. Here’s her true tragic, but also inspiring story.

Pamela Anderson’s childhood was marked by sever trauma and abuse. Over the years, she opened up about her experiences as a child in a troubled household.

Anderson was born in Ladysmith, British Columbia, Canada, and spent her childhood in the small town of Comox. Her parents, Barry and Carol Anderson, were both alcoholics and her father was physically abusive toward her and her siblings. Anderson is open about how her father would come home drunk and take out his frustrations on the family.

RELATED: The Tragic Downfall of Ezra Miller: How to Cope When Your Heroes Become Villains

In addition to the abuse she suffered at home, Anderson was bullied mercilessly at school. She has spoken about how often she was teased and bullied relentlessly by classmates because of her buxom figure and small-town upbringing.

Anderson spoke publicly about the sexual abuse she suffered as a child and as a teenager, and how it affected her throughout her life. The ’90s icon stated she was molested by a female babysitter from the age of 6 to 10, and by the time she was 12 she was raped by a 25-year-old man.

Anderson’s career has not been without its challenges. Throughout her time in the public eye, she faced a number of personal and professional difficulties.

Before becoming a well-known figure, Anderson was just an aspiring talent  trying to establish herself in Hollywood — and it was not a simple journey. After moving to LA, she sent letters to her high school boyfriend about the difficult rise to fame, “It’s tough starting a career isn’t it? You have to put up with a lot of s**t … It just takes so damn long to make someone else believe you and then when they finally believe in you, they have their own hidden agenda.”

RELATED: The Truth Behind Marilyn Monroe and JFK’s Tragic Affair – And Why It Matters Today

In addition to the abuse she suffered as a child, Anderson also spoke about her experiences with sexual harassment and assault in the entertainment industry. Subjected to unwanted advances and brutal discrimination because of her sex symbol status, the aspiring star tired her best to navigate Hollywood.

The harsh criticism and media attention made the actress adopt a few bad habits. In 2002, she revealed she struggled with alcoholism and entered rehab to seek treatment. She has been open about her battle with addiction and credited her two sons as being a major source of motivation to get sober.

Pamela Anderson’s love life was (and still is) the subject of major media attention throughout her career following two marriages and several high-profile relationships.

While filming Baywatch,  she met and married her first husband, Mötley Crüe musician Tommy Lee. The couple had a tumultuous relationship and their marriage was plagued by scandals, including the highly publicized sex tape leaked to the public. The former couple has two sons together, Brandon and Dylan, but their marriage ended in divorce in 1998.

After her separation from Lee, Anderson had several high-profile relationships. She was engaged to model Marcus Schenkenberg, and was also in a relationship with musician Kid Rock. She married the musician in 2006, but the couple divorced just months later.

In more recent years, Anderson has been less public about her love life. Though linked to a number of men, she has not been in any long-term relationships since.

Despite her tumultuous past relationships, Anderson says she is open to the idea of marriage and is looking for someone who is a good match for her and her children.

Growing Up In the Spotlight: Pamela Anderson and Ageism

Anderson has spoken out about facing ageism in the movie industry. As she has gotten older, she has faced challenges in finding roles and has spoken about how Hollywood is not as kind to women who’ve passed a certain age.

In an interview with The Guardian, Anderson says, “It’s tough for women in this industry as you get older. I’m not getting any younger, but I still feel like I have something to offer.” She’s also mentioned that she feels pressure to maintain a youthful appearance and has faced criticism for embracing her age.

Despite these challenges, Anderson continues to work in the entertainment industry and shows that age does not dictate one’s abilities or worth.

Happiness has a lot to do with beauty, calmness, and peacefulness. As Anderson has noted, constant stress is the antithesis of feeling beautiful and confident.

Pamela Anderson Is Dedicating Her Time to Fight the Good Fight

Anderson is an active philanthropist and advocate and uses her voice and massive fan platform to raise awareness and support for several causes.

One of the main causes that Anderson is involved with is animal rights. She is a passionate advocate for animal welfare and has worked with organizations such as PETA (People for the Ethical Treatment of Animals) to raise awareness about animal cruelty. The Baywatch star is involved in campaigns to ban the use of fur in fashion, and she often speaks out against hunting and the use of animals in circuses and zoos.

In addition to animal rights, the Baywatch star is also an advocate for human rights and is involved in various other charitable causes, including supporting organizations that help victims of abuse and violence. She is the founder of The Pamela Anderson Foundation, which supports organizations and individuals that stand on the front lines in the protection of human, animal, and environmental rights.

All in All, Pamela Anderson Has Forged Her Own Path

Throughout her career and her love life, Anderson has been known for her outspoken and independent personality. Despite the challenges she faced in relationships she has remained a strong, independent woman who continues to be a major figure in the entertainment industry.

RELATED: Finland’s Prime Minister Sanna Marin Is Being Crucified for Partying – Which Is Sexist and Absurd

The Baywatch star is set to release a tell-all Netflix documentary about her life, in which she promises to be “raw and honest”. For everyone who is interested to know her real story, the documentary will be released on January 31.

But more than that, Anderson became something other than the woman in a red bathing suit, she went against the stereotypes applied to her and became the person she always wanted. A beautiful reminder that what people think of you does not have to define you.