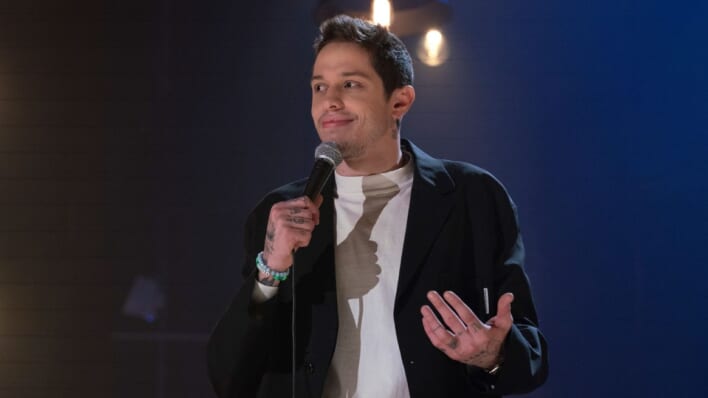 Pete Davidson Revealed His Biggest Dream — But Does It Include Kim Kardashian?

SNL alumni Pete Davidson sat down with Kevin Hart for a heart-to-heart on children and marriage. With a significant age gap with his current girlfriend Kim Kardashian, as well as her four children in the mix, how does his dream of fatherhood play into his relationship?
By Bianca Mercuri    July 27, 2022

SNL alumni Pete Davidson sat down with Kevin Hart for a heart-to-heart on children and marriage. With a significant age gap with his current girlfriend Kim Kardashian, as well as her four children in the mix, how does his dream of fatherhood play into his relationship?

Pete Davidson is a comedian and Saturday Night Live (SNL) alumni. He was an important part of the SNL cast for eight years, finally confirming his last episode in May 2022. While he may be known for his great sense of humor, his tabloid coverage mostly centers around his love life these days.

Davidson’s relationship with Ariana Grande in 2018 gave him a romantic appeal he never had before, and after their breakup, he continued to date a slew of Hollywood A-listers. But, Davidson has grown up a lot since his failed engagement with the Grammy Award winner. In fact, in a recent conversational style interview with comedian Kevin Hart, Davidson opened up about fatherhood.

So, what exactly does fatherhood mean for the 28-year-old? Considering his current relationship with Kardashian, a 41-year-old mother of four, some fans are questioning whether his biggest dream will be possible.

The Kim Kardashian and Kanye West breakup was hard to witness considering they share four children; North, Saint, Chicago, and Psalm. Although messy, their breakup yielded something great for Kim and possibly for her children as well — Pete Davidson.

In October 2021 after Kim hosted SNL, the two were rumored to be seeing each other. After denying the headlines for a while, claiming they were “just friends”, it was confirmed in November that they were officially a couple.

Since then, their whirlwind romance has been filled with vacations, red carpets, and tons of online smooches. It also included some Kim-related tattoos. The infamous Aladdin tattoo is a tribute to their first kiss during their SNL sketch together. Davidson also got the phrase, “My girl is a lawyer,” on his shoulder for Kim who is actively working towards a law degree. Although, the more controversial tattoo has to do with Kim’s kids. The tattoo reads “KNSCP” which are the initials of the reality star and her four children.

His involvement with her kids is not just for show through his ink. He’s been seen hanging out with her kids. There are even photographs of Davidson driving Kim’s pink Moke electric car with North in his lap.

Even though he is witnessing motherhood up-close with Kim and her kids, that may not be the kind of fatherhood that Davidson is longing for. Are her four children enough, or is Davidson searching for offspring that’ll inherit his humor and height?

What Was Said During Pete Davidson and Kevin Hart’s Interview?

Davidson was a guest on Kevin Hart’s Hart to Hart series on Peacock. He used this platform to discuss fatherhood in many ways, including speaking of his father. Davidson lost his father, a firefighter at the time, in the September 11 terrorist attack in 2001. He was just seven years old at the time and this traumatic event spiraled him into a severe depression.

Now, at 28, Davidson talks about fatherhood in the best way possible, as a dream. He’s “definitely a family guy,” he says, “My favorite thing ever, which I’ve yet to achieve, is I want to have a kid. That’s like my dream.”  He proceeded to call this dream “super corny” to which Hart said that having children is “the best God damn thing you can do in life.”

RELATED: What Is ‘BDE’ and What Are the Signs You Have It?

Davidson also said that he wants to use fatherhood as a way to better himself and sees it as a chapter that he’s currently preparing for. In the context of the present, it naturally got the audience thinking about where he’s at in his current relationship with Kim. Hart got the answer to that question before anyone could even ask!

Hart asked The King of Staten Island star to clarify where marriage plays into this dream of being a father and whether he expects the two to come hand in hand. “100 percent,” he responded, “I mean, that’s the way I hope it goes, yeah.”

From this heart-to-heart on Hart to Hart, it’s safe to assume that Davidson sees a future with Kim which hopefully includes some more children running around and some half-siblings for the Kardashian-West crew.

Dreams of Being a Parent: Is Pete Davidson Just Old-School?

Society has become more accepting of parenthood in a less traditional sense. Many women are choosing to have children later, fathers are more likely to opt for paternity leave and so many other developments in the journey to parenthood have become normalized over the years. Most of the world has come to look at parenthood in a much different way, acknowledging that some may even choose to not have children.

As little as 20 years ago it seemed that we lived to conceive, now we live with the purpose of living for ourselves first. Individuals have shared their opinions and reasons for not having children while some young families have used social media to showcase what it means to be a parent and a family. It’s important to acknowledge that one dream does not trump the other.

Like many others, Davidson dreams to have a family of his own. He feels that he will find purpose in fatherhood, which is a common desire. Like all other dreams in life, we choose to do things that will bring us the most happiness but that may not always include children. There are many different ways in which we can define family, but all definitions lead back to being surrounded by love.