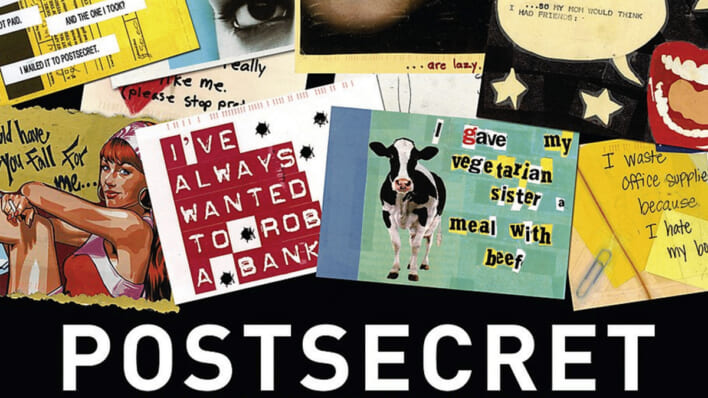 PostSecret: Was the Internet’s Most Secretive Site Helpful or Harmful – And Where Did It Go?

PostSecret was one of the biggest platforms on the internet, until it was abruptly shut down. Nearly two decades after it was founded, questions have been raised about the impact it had. So, what was PostSecret really about, and where did it go?
By Bianca Mercuri    July 2, 2022

PostSecret was one of the biggest platforms on the internet, until it was abruptly shut down. Nearly two decades after it was founded, questions have been raised about the impact it had. So, what was PostSecret really about, and where did it go?

PostSecret, founded by Frank Warren in 2005, was not only a blog, it was a movement. It’s been described as a community art project where people could mail in their secrets anonymously, and in some way — through anonymity — achieve a kind of catharsis.

The “postcards” sent in to the site were posted on its blog for anyone to read. Soon after launching, PostSecret created an app, matching the site’s concept and theme. Through the app, users were able to submit photos and a 140-character secret with the same anonymity the blog provided. This digital confessional took the internet by storm, collecting more secrets than they could tell.

RELATED: Billie Eilish Revealed a Secret, ‘Really Weird’ Condition – And How It Makes Her Stronger

What PostSecret was doing online was innovative for its time; sourcing content from others rather than creating anything original. But there’s still more to PostSecret than meets the eye, including why it’s not around anymore.

The History of PostSecret

In 2005, the capacity of the internet, as well as what you could access on it, were limited, and definitely not the internet that we experience today, nearly two decades later. Before apps like Secret and Whisper, there was PostSecret. Essentially, Frank Warren asked complete strangers to send him the skeletons in their closets –- to his personal home, no less. He would then share these secrets anonymously for everyone to read.

There’s something freeing about saying the untold, especially when it can’t be traced back to you. Many people agreed with that sentiment, which is why it quickly became one of the most popular blogs at the time. Of course, it eventually spiraled into something much bigger than just a digital diary thanks to the hundreds and thousands of postcards submitted. The app quickly became a top seller on the app store, while archived secrets were compiled into an illustrated book. . The New York Times best-selling books list, events, art shows and so much more came out of this one revolutionary idea from Warren.

After more than half a million secrets, Warren decided to take the best ones that he received and share them on a wider scale. The World of PostSecret by Frank Warren kept the PostSecret legacy alive… even years after it fell apart.

PostSecret created a sense of community among people who were not even aware they were part of a community. Everyone was anonymous, tucked away behind a screen, and yet everyone who read and contributed to the site were bonded by this experience of secret sharing.

PostSecret made people realize that they could be whoever they wanted online, and as such, anonymity became normalized. People could make fake accounts and pretend to be someone else, allowing them to be as honest — or deceptive — as they wanted. This ability to be nameless and faceless allowed people to free themselves without the worry of judgment or acknowledgment.

However — perhaps because of its capacity for duplicity — PostSecret doesn’t have a spotless record. It’s been infamously used for toxicity and misleading information, as well as criticized for the lack of community moderation, which ultimately led to some questionable posts. But how much can we blame PostSecret for the state of the internet now?

RELATED: How the Internet has Changed Entrepreneurship Forever

While the internet can be a great way to connect with like-minded people, it can also be a tough space to navigate. Anonymity may have started out as a wholesome idea, but it’s turned into a world of catfishing, online bullying and so much more. Acting through an unknown profile behind a screen gives people permission to say or do things they normally wouldn’t if it were attributed to themselves. This is the main reason why people felt comfortable sharing openly and honestly on PostSecret, but it’s also what continues to encourage others to act maliciously online. THat’s not PostSecret’s direct fault, of course, but it was indirectly assisted by its thematic verve.

These are all things to consider in the discussion of how PostSecret impacted internet culture today — again, though it may be an indirect result, seemingly at odds with the intention of the site. That said, we can criticize many other social media platforms using that same logic, including Facebook. So, can we really put all the blame on PostSecret?

What Happened to PostSecret?

PostSecret died a long time ago, melting into a distant memory of what the internet used to be. Why did it fall into oblivion? Like most things on the internet, it simply got canceled, forcing Warren pull the plug himself.

Like any site with a large number of users, it needs to be moderated. With content being curated at such a high speed, as well as the encouraged anonymity, PostSecret was seeing gruesome, pornographic, and even threatening posts. Content needed to be better moderated and screened for harmful subject matter, but with the velocity they were coming in, it was nearly impossible to do so. Disturbing messages, vicious bullying tactics, and graphic images were just the start of the dangerous posts that were popping up.

For the safety of the community, in particular, the young people who used PostSecret, it was crucial for Warren to hit the brakes. The site and app both had their good moments and paved the way for others to follow their lead, continuing where they left off. The most important lesson that PostSecret taught, really, us is that people need limitations to maintain order in an online space.

Internet safety needs to be taught. Children should know basic skills related to online interactions, which can allow them to navigate and choose safe spaces as well as look out for danger in the form of content and people. The majority of people online want to spread positivity and support, but even a small percentage of bad apples can spoil the whole bunch.