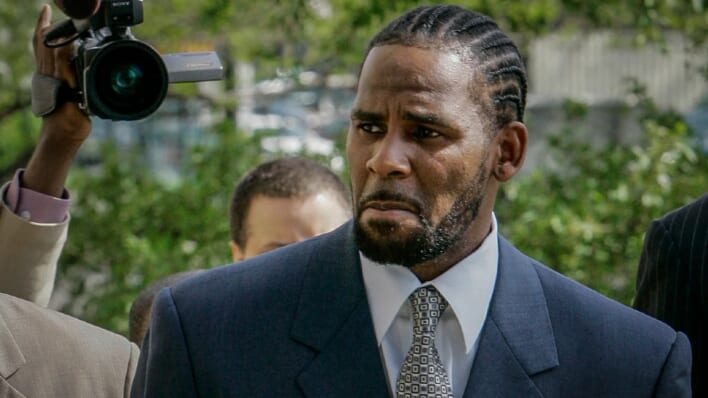 R. Kelly’s Sadistic 30-Year Rampage Is Our Fault and We Have to Do Better

R. Kelly spent most of his life committing sexual crimes and mostly toward vulnerable minors. When the horrific accusations were made public, his music accolades and accomplishments seemed to overshine them. Allegations were swept under the rug for nearly fifteen years. How and why were these accusations ignored, and how can we do better to protect women?
By Bianca Mercuri    August 17, 2022

R. Kelly spent most of his life committing sexual crimes and mostly toward vulnerable minors. When the horrific accusations were made public, his music accolades and accomplishments seemed to overshine them. Allegations were swept under the rug for nearly fifteen years. How and why were these accusations ignored, and how can we do better to protect women?

R. Kelly used to be known for the mark he made in R&B music. As a singer-songwriter, he’s had many accomplishments that launched him into stardom. More recently, he’s been known for his federal trials about the sexual assault allegations against him. But if we take a closer look at R. Kelly’s early life in the spotlight, even before any allegations, we can see a disturbing pattern that failed to be acknowledged with the severity it deserved.

RELATED: Meghan Markle Always Speaks Up Against Injustice–No Matter What Form It Takes

Let’s look at a timeline of the last three decades of R. Kelly’s life or sexual crimes and how he got away with it for so long. Who knew about these crimes and chose to ignore them, how did the tabloids skim over this and who were the victims who were brave enough to speak out?

In 1993, R. Kelly released his album 12 Play which sold more than 5 million copies. It included songs like “Sex Me” and “Bump N’ Grind”. It was common for his music to be sexual in nature, specifically in lyrical content. When looking at the context of the upcoming years, it definitely warrants some red flags.

It was in 1994 when Kelly started to exhibit dangerous behavior. He arranged a marriage ceremony at a Chicago hotel between himself and 15-year-old R&B singer Aaliyah D. Haughton. Only months later the marriage was annulled due to her age. Despite Kelly being 27 at the time, it seemed as though this incident was not viewed as threatening behavior on his part as it was skimmed over by the press. His music continued to thrive over the years which trumped any tabloid coverage of his predatory actions.

The sexual assault complaints began in 1997 with Tiffany Hawkins. She alleged that Kelly engaged in intentional sexual battery and sexual harassment while she was a minor. This lawsuit was settled in 1998. It’s reported that the settlement was for $250,000. Meanwhile, in that same year, Kelly goes on to win three Grammys for “I Believe I Can Fly”. Once again, the exploitative nature of his behind-the-scenes life going under the radar.

In 2002, the Chicago Sun-Times broke the news of a videotape that showed Kelly having sex with a minor. They reported that the Chicago police opened an investigation about the allegations but at the time, the girl and her parents denied that she was having sexual relations with Kelly. That same day, Kelly continued to perform at the opening ceremonies for the Winter Olympics in Salt Lake City. But, only months later that same year, Kelly is indicted in Chicago on child pornography charges from that videotape. He pleads not guilty and paid $750, 000 to be released on bail.

It was only in 2003 when these charges were acted upon and Kelly was arrested at a Florida hotel for additional pornography charges after police found explicit photos as well. Although, without a search warrant to search Kelly’s house, the charges were dropped. Until 2005, Kelly continued to release music that dominated the charts, earning number one spots and selling hundreds of thousands of copies of his music worldwide.

2005 to 2007 brings up more suspicious encounters with Kelly. His wife at the time Andrea Kelly requests an order of protection from Kelly after accusing him of hitting her when she asked for a divorce. Only six months after this incident in 2006, Kelly’s brother says that he was offered $50,000 and a record deal from the singer to claim he was the person in the sex tape. Disappointingly, in 2007 after all of this occurred his album Double Up peaked at number one on the Billboard Charts.

In 2008 Kelly’s child pornography trial begins but he is acquitted after less than a day of deliberations.

This acquittal was followed by silence for many years. While Kelly stayed in the media for financial troubles including owing the IRS millions of dollars, his accusations of sexual misconduct were swept under the rug. It was only in 2017 when it was all brought back up by one Buzzfeed report on a parent’s claim that Kelly brainwashed their daughters and was keeping them in an abusive cult. They started the #MuteRKelly movement which went on to push for further investigation. This opened up Pandora’s box, allowing other victims to come forward.

In 2018, Faith Rodgers filed a lawsuit against R. Kelly for sexual battery, mental and verbal abuse as well as not disclosing that he had herpes and knowingly inflicting her with the viral infection. This case unfolds in the coming years and Rodgers discloses more information, saying that Kelly threatened to reveal embarrassing details of her sexual history if she didn’t drop the lawsuit.

The Cancelling of R. Kelly That Came 15 Years Too Late

2019 marks the true fall of R. Kelly and the justice that came 15 years too late. It all started with the release of Lifetime’s documentary Surviving R. Kelly which detailed his old allegations and brought new ones to light. This was not long after BBC’s R Kelly: Sex, Girls & Videotapes which had been released the previous year about the singer holding women against their will, corroborating the Buzzfeed report back in 2017.

In response to Surviving R. Kelly Lady Gaga removed her duet with the singer from streaming services. Only a month after the documentary aired, attorney Michael Avenatti chimed in, providing Chicago prosecutors with new video evidence detailing Kelly and an underage girl, a video that is not the same as what was used in Kelly’s 2008 trial. This evidence led up to Kelly’s arrest on 10 counts of aggravated sexual abuse. He posted bail after these charges, but soon after was charged once more with 11 new sex-related crimes in Chicago.

Kelly is indicted by a federal grand jury in the state of Chicago on child pornography, enticement of a minor, and obstruction of justice. The Eastern District of New York filed a separate charge including racketeering, kidnapping, forced labor, and sexual exploitation of a child. Finally, after posting bail many times in his life, Kelly was ordered to be held without bond as he posed an extreme danger to young women otherwise.

All happening in the same year, 2019 continues to be a train wreck for Kelly. He is charged in Minnesota for prostitution and solicitation in relation to an incident in 2001 where a minor was paid to dance nude with him.

Just when the world thought that the horrifying details of R. Kelly’s predatory patterns couldn’t get worse, we learn in 2021 that Kelly also had sexual contact with an underage boy and many minor girls which would become important in his upcoming trial. In his 2021 trial, the jury found Kelly guilty of sex trafficking and violation of the Mann Act which says that it’s illegal to cross state lines with anyone for immoral purposes.

But, it’s in June 2022 when Kelly is finally sentenced to 30 years in prison in his New York case. But, at this time, he is still scheduled to stand trial in Chicago on counts of child pornography and obstruction of justice charges.

Kelly, now 55, is currently facing charges in Chicago for coercing minors into sexual acts and multiple criminal counts related to child pornography. He is still set to stand trial for criminal charges in Illinois and Minnesota which will be dealt with after this ongoing federal court case.

After seeing the timeline of all the allegations against Kelly, it’s impossible to recognize how far back they go. They are intertwined with his accolades, awards, and accomplishments which reinforce the idea that while his behavior was known, it was ignored. His lawyers and management protected him on top of his family who clearly knew of his wrongdoings. The media coverage took his music as a priority over his allegations which gave everyone else in the business and many of the audience at home permission to also ignore it, wondering if they had any merit to them.

When accusations are made and ignored, it brings doubt about whether or not they’re true. Especially considering that he was acquitted in the past as well. But his past acquittal and posted bails are due to a lack of proper investigation. His fame is what got him out of trouble in the beginning, but could not save him in the end. Many listened to his music and watched him walk across red carpets. It was his life behind closed doors that was neatly packed away and rarely divulged. It was known and yet, not spoken about.

How many people knew about Kelly’s sexual assault allegations? It could be argued that it was public knowledge. So, why did it fly under the radar for so long? Women were scared to share their stories. They feared that no one would side with them, that they wouldn’t be believed. Any accusations before the “Me Too” movement in 2016 came with enough anxiety and fear to silence the victims.

Society is moving forward, slowly but surely. With so many women now coming out with their own experiences with sexual battery, abuse, harassment, misconduct, and more, it’s hard to deny that this is a pattern that needs to be addressed. Cases like Harvey Weinstein and Bill Cosby along with many others are just scratching the surface of Hollywood’s dark past with sexual crimes.

The only way that true change can be achieved is through the bravery of the victims coming forward. We need to do better in our quest to take down sexual assault crimes, especially when it comes to vulnerable minors. Sexual predators can only get away with it if we let them. We need to pay more attention to the predators hiding in plain sight – like our TV screens.

It takes true courage to share the scariest and most traumatic points of our lives, and the victims of not just R. Kelly, but victims of sexual crimes are doing so for the greater good. We are far from the justice that these women deserve, but the R. Kelly Chicago trial is a good place to start.